Off the Wall (Hardcover) 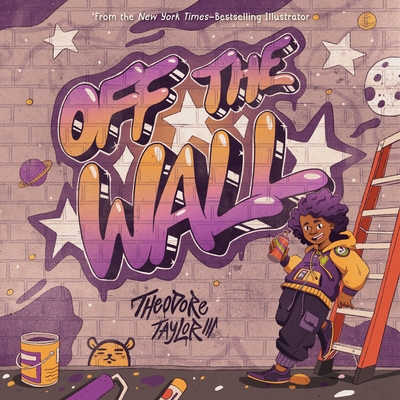 Off the Wall (Hardcover)

From New York Times bestselling illustrator Theodore Taylor III comes a vibrant ode to street art, a picture book about a child discovering all of the beauty—and art—her new neighborhood has to offer.

Shapes moving in every direction,
letters weaving in and out,
bright colors jumping off of the wall.

It was like a language from another
planet that only I could understand.

In this bright, colorful, and movement-filled picture book Off the Wall, a young girl moves with her family from the big city to a small town. She feels odd and out of place until a stroll down the street hits her with echoes from home: vibrant graffiti splashed against the wall. But when it's painted over that sense of belonging is lost, until an afternoon's adventure shows her that street art can be found everywhere—as well as a sense of home.

In his exceptional author-illustrated debut, Theodore Taylor III has crafted an ode to street art, a stunning celebration of a much-maligned art form and all the beauty it brings to a neighborhood.

Theodore Taylor III is a children's book author and illustrator living in Richmond, Virginia with his wife Sarah and son Theo. He is the illustrator of Woke, Woke Baby, and the New York Times bestselling C is for Country by Lil Was X. He also received the Coretta Scott King John Steptoe New Talent Award for his work on When The Beat Was Born: DJ Kool Herc and the Creation of Hip Hop. He is also the illustrator behind Shaquille O'Neal's Little Shaq Series. During the day he also works as a front-end web developer. His work is inspired by his love of music, comics, animation, video games, street art, and more. He is also a self-proclaimed pizza connoisseur.