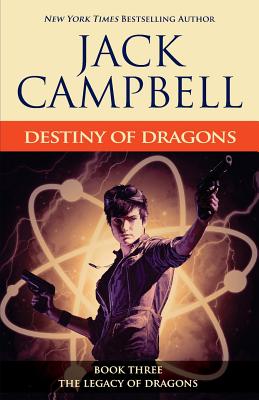 This is book number 3 in the Legacy of Dragons series.

In the thrilling conclusion to the Legacy of Dragons trilogy, ancient weapons of mass destruction lie hidden under the city of Pacta Servanda. Remnants of the Great Guilds and rebellious factions of the Empire want to seize those weapons to allow them to regain control of the world of Dematr. Only Jason, brought by the first ship from Earth since the colony failed, might be able to disarm the threat. But he also might know how to employ those weapons, making him a danger for all sides.

Standing between those threats is Kira of Dematr. But Kira, who inexplicably has been able to manifest Mage powers as well as technical skills, finds herself being consumed by the mental conflicts between those powers and skills. As rogue Mechanics, Mages, and mercenaries attack with every weapon at their disposal, Kira suffers more blackouts and begins to lose her mind. The fate of her world rests on whether she can stay alive and find answers in time to problems that no one else has ever confronted.
"Jack Campbell" is the pseudonym for John G. Hemry, a retired Naval officer who graduated from the U.S. Naval Academy in Annapolis before serving with the surface fleet and in a variety of other assignments. He is the author of The Lost Fleet military science fiction series, as well as the Beyond the Frontier continuation of The Lost Fleet, spin-off series The Lost Stars, the Stark's War series, and the Paul Sinclair/"JAG in space" series. His short fiction appears frequently in Analog magazine, and many have been collected in the three Jack Campbell ebook anthologies, Ad Astra, Borrowed Time, and Swords and Saddles. The Pillars of Reality is his first epic fantasy series. He lives with his indomitable wife and three children in Maryland.