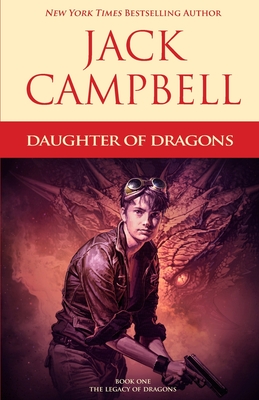 This is book number 1 in the Legacy of Dragons series.

The legacy of Mari and Alain blazes ahead in this brand-new sequel to The Pillars of Reality series. The Great Guilds had conspired for centuries to keep Dematr unchanged. The Mechanics Guild kept secret the technolgy for steam locomotion, rifles, and far-talkers, leaving most people to live in a world of oil lamps, crossbows, and horse cavalry, while the Mages treated all others as if they were nothing - until Master Mechanic Mari, dragon slayer and pirate queen, and Master of Mages Alain raised the army of the new day to free their world. Kira of Pacta Servanda, the daughter of the two greatest heroes of her world, was six years old the day she stood on a battlement in Dorcastle, kept safe from the nearby crowds by bodyguards as she stared up at a statue of her mother. As the morning sun cast the shadow of Mari's statue over Kira, she realized that she would spend the rest of her life in that shade. Then the world of Dematr learned that a new kind of ship had left the far-distant world of Urth. The ship would take just 10 years to cover the immense distances between stars. Of all the colony worlds, the ship was coming to Dematr. But for what purpose? Kira was 16 when the ship from Urth arrived, and she discovered that her world still needed heroes.

"Jack Campbell" is the pseudonym for John G. Hemry, a retired Naval officer who graduated from the U.S. Naval Academy in Annapolis before serving with the surface fleet and in a variety of other assignments. He is the author of The Lost Fleet military science fiction series, as well as the Beyond the Frontier continuation of The Lost Fleet, spin-off series The Lost Stars, the Stark's War series, and the Paul Sinclair/"JAG in space" series. His short fiction appears frequently in Analog magazine, and many have been collected in the three Jack Campbell ebook anthologies, Ad Astra, Borrowed Time, and Swords and Saddles. The Pillars of Reality is his first epic fantasy series. He lives with his indomitable wife and three children in Maryland.