The Hen of the Baskervilles (Meg Langslow Mysteries #15) (Compact Disc) 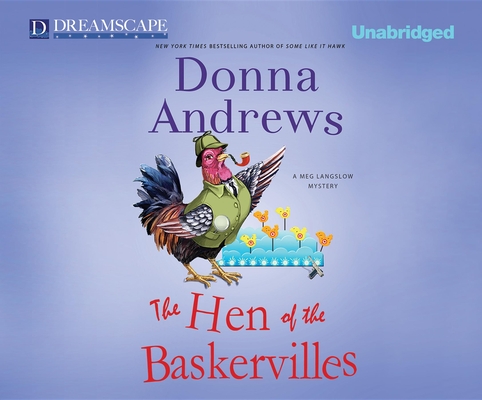 The Hen of the Baskervilles (Meg Langslow Mysteries #15) (Compact Disc)

This is book number 15 in the Meg Langslow Mysteries series.

Meg Langslow is helping organize the Virginia Un-Fair, Caerphilly's entry in the race to replace the old state fair. While patrolling the fairgrounds, Meg runs into her friend Molly. Molly is terrified that she may lose her farm because her idle husband has left her for a rich hobby winemaker and is demanding his half of the land. Meg enlists Mother's help to find Molly a divorce lawyer, which Mother is all the more willing to do because the unfaithful husband's new girlfriend is the bete noire of the wine pavilion. She is so universally disliked that Meg begins to worry about her safety. But it's the unfaithful husband whose murdered body she and Michael find that night.
Donna Andrews is the author of the Meg Langslow mysteries, including Stork Raving Mad and Swan for the Money. She has won the Agatha, Anthony, and Barry awards, a Romantic Times award for best first novel, and two Lefty and two Toby Bromberg Awards for funniest mystery. When not writing fiction, Andrews is a self-confessed nerd, rarely found away from her computer, unless she's messing in the garden. She lives in Reston, Virginia. READER BIO Winner of more than a dozen Audiofile Earphones Awards and a three-time Audie nominee, Bernadette has been honored to narrate the work of Margaret Atwood, Joyce Carol Oates, Shirley Jackson and Anne Rice to name but a few. In the non-fiction category she has recorded the philosophy of Ayn Rand and the autobiographies of Barbara Walters and Katharine Hepburn. Popular favorites include Memoirs of a Geisha, The Devil Wears Prada and the Betty Smith classic, A Tree Grows in Brooklyn. Bernadette studied at The Royal National Theater in London and lives in New York.