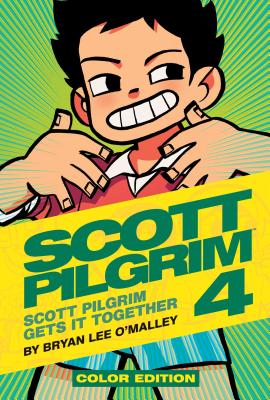 This is book number 4 in the Scott Pilgrim series.

The full-color remastering of the SCOTT PILGRIM epic continues! It's summertime, but who can relax? Scott's relationship with Ramona Flowers is sweeter than ever, but he's still got girl troubles, seven evil ex-boyfriends still want to kill him, and worst of all, now Ramona wants him to get a job! Kicks, punches, rock & roll, subspace, half-ninjas, experience points, samurai swords, girly action, and laughable attempts to seek gainful employment are all that stand in the way of Scott Pilgrim getting it together! Includes previously unpublished extras, deleted scenes, and exclusive bonus content, all in glorious color!
Bryan Lee O'Malley is a Canadian cartoonist best known for the bestselling, award-winning Oni Press series "Scott Pilgrim" (2004-2010). "Scott Pilgrim" was adapted into a critically-acclaimed major motion picture (from Universal) and video game (from Ubisoft) in 2010. O'Malley lives in Los Angeles, where he continues to make comics.