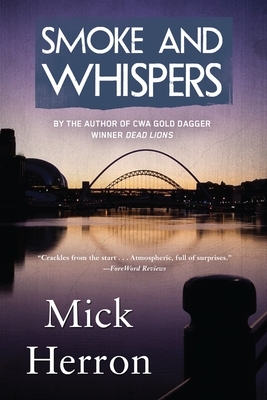 This is book number 4 in the The Oxford Series series.

Oxford private detective Zoë Boehm turns up dead in Newcastle, launching her friend Sarah Tucker into an investigation with several leads—but no one she can trust.

When a body is hauled from the River Tyne, Sarah Tucker heads to Newcastle for a closer look. She identifies the dead woman as private detective Zoë Boehm, but putting a name to the corpse only raises further questions. Did Zoë kill herself, or did one of her old cases come back to haunt her? Why was she wearing the jacket a murderer had stolen years before? And what’s brought Sarah’s former sparring partner Gerard Inchon to the same broken-down hotel where she’s staying? Coincidence is an excuse that soon appears pretty unconvincing. Sarah can’t leave until she’s found the answers to her questions, however dangerous they might turn out to be.
Mick Herron is a British novelist and short story writer who was born in Newcastle and studied English at Oxford. He is the author of six books in the Slough House series (Slow Horses, Dead Lions, Real Tigers, Spook Street, London Rules, and the novella The List) and four Oxford mysteries (Down Cemetery Road, The Last Voice You Hear, Why We Die, and Smoke and Whispers), as well as the standalone novels Reconstruction, Nobody Walks and This Is What Happened. His work has won the CWA Gold Dagger for Best Crime Novel, the Steel Dagger for Best Thriller, and the Ellery Queen Readers Award, and been nominated for the Macavity, Barry, Shamus, and Theakstons Novel of the Year Awards. He currently lives in Oxford and writes full-time.
Praise for Smoke and Whispers

“You can always tell when a pro is clicking on all cylinders. Smoke and Whispers, Mick Herron's fifth novel, crackles from the start . . . Atmospheric, full of surprises, with some pools of seductive prose.”
—ForeWord Reviews

“Smoke and Whispers is an electrifying story that doesn't let up from start to finish . . . A most original, satisfying suspense thriller.”
—Mysterious Reviews

“Always interesting and entertaining . . . Anyone who starts the Zoë ‘tetralogy’ will be rewarded by continuing with the series.”
—International Noir Fiction

"Masterful . . . How Herron is able to tie all these events together will test the sleuthing ability of even the most savvy readers as one surprise engenders another. The intricate plot, coupled with Herron’s breezy writing style . . . results in superior entertainment that makes most other novels of suspense appear dull and slow-witted by comparison."
—Publishers Weekly, Starred Review