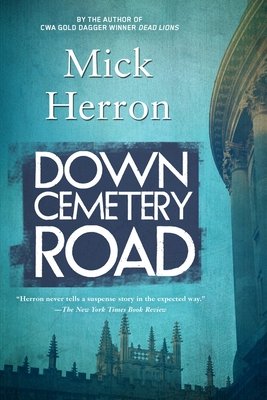 This is book number 1 in the The Oxford Series series.

When a house explodes in a quiet Oxford suburb and a girl disappears in the aftermath, Sarah Tucker—a young married woman, bored and unhappy with domestic life—becomes obsessed with finding her. Accustomed to dull chores in a childless household and hosting her husband’s wearisome business clients for dinner, Sarah suddenly finds herself questioning everything she thought she knew as her investigation reveals that people long believed dead are still among the living, while the living are fast joining the dead. What begins in a peaceful neighborhood reaches its climax on a remote, unwelcoming Scottish island as the search puts Sarah in league with a man being hunted down by murderous official forces.

Mick Herron is a British novelist and short story writer who was born in Newcastle and studied English at Oxford. He is the author of six books in the Slough House series (Slow Horses, Dead Lions, Real Tigers, Spook Street, London Rules, and the novella The List) and four Oxford mysteries (Down Cemetery Road, The Last Voice You Hear, Why We Die, and Smoke and Whispers), as well as the standalone novels Reconstruction, Nobody Walks and This Is What Happened. His work has won the CWA Gold Dagger for Best Crime Novel, the Steel Dagger for Best Thriller, and the Ellery Queen Readers Award, and been nominated for the Macavity, Barry, Shamus, and Theakstons Novel of the Year Awards. He currently lives in Oxford and writes full-time.

Praise for Down Cemetery Road

“[Down Cemetery Road] shifts from domesticity with violence and private detectives—initially seeming something like Kate Atkinson's detective novels in both the quality of the writing and the lightness of tone—to something like Christopher Brookmyre at his best . . . Herron is a major writer of considerable wit and talent.”
—International Noir Fiction

“A superb thriller . . . Herron may be the most literate, and slyest, thriller writer in English today.”