Observations by Gaslight: Stories from the World of Sherlock Holmes (Paperback) 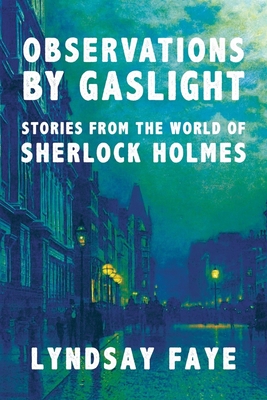 Observations by Gaslight: Stories from the World of Sherlock Holmes (Paperback)

One of PopSugar's Best New Mysteries and Thrillers of December 2021

A new collection of Sherlockian tales that shows the Great Detective and his partner, Watson, as their acquaintances saw them

Lyndsay Faye—international bestseller, translated into fifteen languages, and a two-time Edgar Award nominee—first appeared on the literary scene with Dust and Shadow, her now-classic novel pitting Sherlock Holmes against Jack the Ripper, and later produced The Whole Art of Detection, her widely acclaimed collection of traditional Watsonian tales.  Now Faye is back with Observations by Gaslight, a thrilling volume of both new and previously published short stories and novellas narrated by those who knew the Great Detective.

Beloved adventuress Irene Adler teams up with her former adversary in a near-deadly inquiry into a room full of eerily stopped grandfather clocks.  Learn of the case that cemented the lasting friendship between Holmes and Inspector Lestrade, and of the tragic crime which haunted the Yarder into joining the police force. And witness Stanley Hopkins’ first meeting with the remote logician he idolizes, who will one day become his devoted mentor.

From familiar faces like landlady Mrs. Hudson to minor characters like Lomax the sub-librarian, Observations by Gaslight—entirely epistolary, told through diaries, telegrams, and even grocery lists—paints a masterful portrait of Sherlock Holmes and Dr. Watson as you have never seen them before.

Lyndsay Faye is the author of six critically acclaimed books: The Paragon Hotel; Jane Steele, which was nominated for an Edgar for Best Novel; Dust and Shadow, a Sherlock Holmes pastiche; The Gods of Gotham, also Edgar-nominated; Seven for a Secret; and The Fatal Flame. She has also published numerous short stories featuring the Holmes character, several of which were collected in 2017’s The Whole Art of Detection. She lives in Queens.
Nuance, wit, and clever plotting make this a superior version of George Mann’s Associates of Sherlock Holmes anthologies. Sherlockians will clamor for a sequel.
— Publishers Weekly STARRED REVIEW

Told in epistolary style, through letters and diary entries, this engaging anthology offers a sympathetic view of Sherlock Holmes. Faye’s voice and knowledge of the original stories will appeal to fans.
— Library Journal STARRED REVIEW

Faye is an expert on all things Sherlockian, she has unparalleled flair. You think you know Lomax the sub-librarian? Well, THINK AGAIN.
— CrimeReads, The Most Anticipated Books of 2021

Unlike any Holmes collection I have ever read [...] OBSERVATIONS BY GASLIGHT is so authentic and real that readers will practically be able to see the dark smoke billowing from the chimney tops and smell the lamplighter’s oil as he lights each gaslight in London. Faye is brilliant and makes me wish I had thought of this idea first!
— Bookreporter

Meat and drink for fans of the Canon of the Sacred Writings.
— Kirkus

The stories all constitute engrossing, well-paced mysteries, and Faye gives unique, sometimes comic, often knowingly critical voices to her cast of supporting characters turned lead. Especially captivating is Faye's Irene Adler, a consummately professional actress whose thespian fervor drives her to dress up in the streets and understand Holmes's own compulsive need to perform roles.
— Reviewing the Evidence

An excellent collection filled with wonderful variations on Sherlock Holmes stories. The fact all of these variations come from Lyndsay Faye helps to prove she is a true treasure, someone whose work we will be appreciating for decades to come. Easily recommended to fans of the author, or fans of Sherlock Holmes.
— A Green Man Review

One of the best examples of [Sherlock Holmes pastiche] that this die-hard Sherlockian has encountered . . . Faye perfectly captures the tone and spirit of the Conan Doyle originals.
— Seattle Times (on The Whole Art of Detection)

Lyndsay Faye, one of the most exhilarating voices in fiction today, has come home to Baker Street in this essential new collection. Read at once if convenient -- if inconvenient read all the same.
— Daniel Stashower

There are only a handful of authors that I trust implicitly. There are even fewer that I trust working within the world of Sherlock Holmes. Lyndsay Faye is the only writer I can think of who checks both boxes. Many have tried to “add” to the canon and I have found none so effortless as Faye’s stories [...] We can only hope Faye has more of these inventive stories to share with us. May there always be a gaslight on at 221b Baker St.
— Meaghan Walsh Gerard