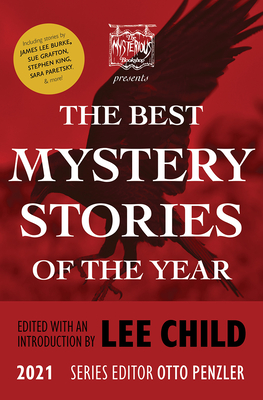 A Suspense Magazine Best Book of the Year

Lee Child selects the twenty best mystery short stories of the year, including tales by Stephen King, Sara Paretsky, and many more.

Under the auspices of New York City's legendary mystery fiction specialty bookstore, The Mysterious Bookshop, and aided by Edgar Award-winning anthologist Otto Penzler, international bestseller Lee Child has selected the twenty most suspenseful, most confounding, and most mysterious short stories from the past year, collected now in one entertaining volume.

Lee Child is the author of the #1 New York Times bestselling Jack Reacher thrillers. All his novels have been optioned for major motion pictures, and foreign rights in the Reacher series have sold in one hundred territories. He lives in New York City.

Otto Penzler, the creator of American Mystery Classics, is also the founder of the Mysterious Press (1975); Mysterious Press.com (2011), an electronic-book publishing company; and New York City’s Mysterious Bookshop (1979). He has won a Raven, the Ellery Queen Award, two Edgars (for the Encyclopedia of Mystery and Detection, 1977, and The Lineup, 2010), and lifetime achievement awards from Noircon and The Strand Magazine. He has edited more than 70 anthologies and written extensively about mystery fiction.
The 20 entries in this superior anthology exhibit the storytelling gifts of authors both familiar and not [...] This volume is a must for mystery aficionados.
— Publishers Weekly STARRED REVIEW

20 gems […] Child’s selections seem especially appropriate for 2021, a year that promises change on so many fronts.
— Kirkus STARRED REVIEW

There is such a wide variety here, in terms of literary style and subject matter, that it’s hard to imagine a genre fan who would not find something to treasure. The book belongs on the shelf next to such essential anthologies as the Best American Mystery Stories series and Akashic Books’ voluminous Noir series.
— Booklist

A delicious mix of style and subgenre—there isn’t a weak link in the bunch.
— Library Journal

It’s no stretch to say these were some of the best short stories from 2020, and the collection is sure to have something for everyone—from those who like traditional mysteries to those who like thrillers or noir stories.
— Reviewing the Evidence

While a best mystery stories volume can be expected to include many quality works, the editors for this particular piece have outdone themselves. The quality and variety in this collection mean that any reader should find something to enjoy if they appreciate mystery or crime at all. Murder, theft, classic detective and no detective all fit within the short but entertaining volume. Heartily recommended.
— A Green Man Review