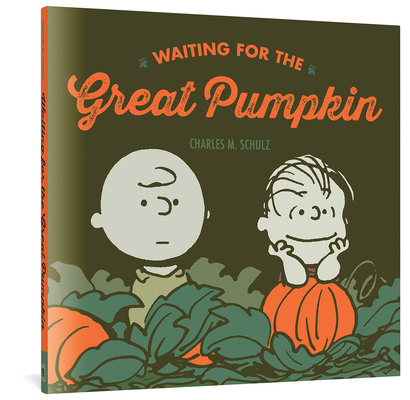 See where Linus’ quest to meet the Great Pumpkin began in this gift-book-sized collection of the Peanuts newspaper-strip story arcs.

Linus and his wait for the Great Pumpkin have been a pop culture touchstone for nearly 50 years thanks to the animated television special (“I got a rock”), and it all started in the classic Peanuts strips (1959-1962) collected in this affordable, fun-sized gift book. Linus’s proselytizing that on Halloween, the Great Pumpkin rises from the pumpkin patch and travels the world bringing presents to good little girls and boys are derided by his sister Lucy, laughed at by Charlie Brown, met with skepticism by baby Sally, and even causes “denominational squabbling” over who’s better, the Great Pumpkin or Santa Claus. Year after year, Linus faces his persecution and inevitable disappointment with either blind faith or Quixotic perseverance. Charles M. Schulz’s homage to the power of idealism and belief makes these some of the most beloved comic strips of all time.

Charles M. Schulz was born November 25, 1922, in Minneapolis. His destiny was foreshadowed when an uncle gave him, at the age of two days, the nickname Sparky (after the racehorse Spark Plug in the newspaper strip Barney Google).

In his senior year in high school, his mother noticed an ad in a local newspaper for a correspondence school, Federal Schools (later called Art Instruction Schools). Schulz passed the talent test, completed the course, and began trying, unsuccessfully, to sell gag cartoons to magazines. (His first published drawing was of his dog, Spike, and appeared in a 1937 Ripley's Believe It or Not! installment.) Between 1948 and 1950, he succeeded in selling 17 cartoons to the Saturday Evening Post—as well as, to the local St. Paul Pioneer Press, a weekly comic feature called Li'l Folks. It was run in the women's section and paid $10 a week. After writing and drawing the feature for two years, Schulz asked for a better location in the paper or for daily exposure, as well as a raise. When he was turned down on all three counts, he quit.

He started submitting strips to the newspaper syndicates. In the spring of 1950, he received a letter from the United Feature Syndicate, announcing their interest in his submission, Li'l Folks. Schulz boarded a train in June for New York City; more interested in doing a strip than a panel, he also brought along the first installments of what would become Peanuts—and that was what sold. (The title, which Schulz loathed to his dying day, was imposed by the syndicate.) The first Peanuts daily appeared October 2, 1950; the first Sunday, January 6, 1952.

Diagnosed with cancer, Schulz retired from Peanuts at the end of 1999. He died on February 13, 2000, the day before Valentine's Day—and the day before his last strip was published—having completed 17,897 daily and Sunday strips, each and every one fully written, drawn, and lettered entirely by his own hand—an unmatched achievement in comics.

This adorable little collection of strips is the perfect prize for your costume contest. Growing up, you may have gotten to know the Great Pumpkin mainly through the evergreen TV special — but the original strips collected here are both brainier and more emotionally complex than the show.
— Etelka Lehoczky

It doesn’t get better than this.
— Heidi MacDonald