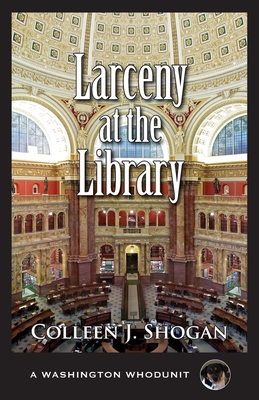 This is book number 6 in the Washington Whodunit series.

Congressional chief of staff Kit Marshall is finally figuring out what it takes to work for a newly minted committee chair in the House of Representatives. After a swanky evening soiree at the Library of Congress, Kit's husband Doug discovers the body of a high-ranking librarian inside a ceremonial office. In addition to a murder, there's also a major theft to complicate the situation. The contents of Abraham Lincoln's pockets the night he was assassinated have gone missing. Kit's political boss and the Librarian of Congress ask Kit to investigate, and she's released into a world of intrigue populated by a frisky donor, an ambitious congressional relations specialist, a cagey rare books curator, an overly curious congressman, and a baseball-loving lawyer. Kit must solve the crime before Doug's career is tanked by suspicion. The case takes her to the inner bowels of the Library of Congress, Ford's Theatre, the National Portrait Gallery, and the D.C. Public Library. In the end, Kit must put her own life on the line to retrieve her most valuable possession, which goes unexpectedly missing as she hunts down the killer and thief.