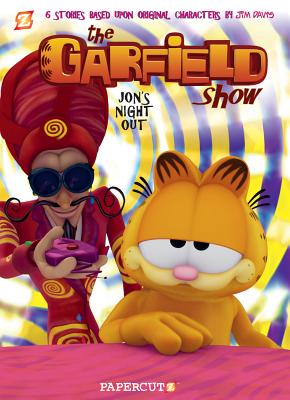 This is book number 2 in the The Garfield Show series.

When Jon can't sleep, he seeks help from a sketchy hypnotist named Professor Somnanbulo, who gives him a machine called the Hypno-Snore. When Jon turns it on, Odie interrupts with his barking. Unbeknownst to him, Jon's been hypnotized to fall asleep -- and sleepwalk -- whenever Odie barks! It's up to Garfield to UN-hypnotize Jon, before things really get out of hand!
Featuring five more fun-filled stories starring Garfield, Odie, Nermal, and the rest of the gang!

“I grew up watching Garfield and ended up being one of hundreds of kids who adored this fun, sarcastic, laid back cat. I like that they've brought him back for a whole new generation to love him.” —MUNDIE KIDS

“My kids like the cartoon fine, but they really liked the comics.” —COMICS IN THE CLASSROOM

“The stories are entertaining and have that sense of humor that have kept the strips popular all these years.” —SCHOOL LIBRARY JOURNAL