They Live: A Novel Approach to Cinema (Deep Focus #1) (Paperback) 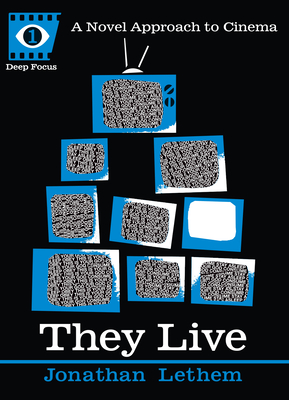 They Live: A Novel Approach to Cinema (Deep Focus #1) (Paperback)


Email for availability
“One of the cleverest, most accessibly in-depth film books released this year . . . a smart-ass novelist exploring a cheesy-cheeky ‘80s sci-fi flick.”—Hartford Advocate

Deep Focus is a series of film books with a fresh approach. Take the smartest, liveliest writers in contemporary letters and let them loose on the most vital and popular corners of cinema history: midnight movies, the New Hollywood of the sixties and seventies, film noir, screwball comedies, international cult classics, and more . . . Kicking off the series is Jonathan Lethem’s take on They Live, John Carpenter’s 1988 classic amalgam of deliberate B-movie, sci-fi, horror, anti-Yuppie agitprop.

Lethem exfoliates Carpenter’s paranoid satire in a series of penetrating, free-associational forays into the context of a story that peels the human masks off the ghoulish overlords of capitalism. Taking into consideration classic Hollywood cinema and science fiction—as well as popular music and contemporary art and theory—They Live provides a wholly original perspective on Carpenter’s subversive classic.
Jonathan Lethem was born in New York and attended Bennington College. He is the author of seven novels including Fortress of Solitude and Motherless Brooklyn, which was named Novel of the Year by Esquire and won the National Book Critics Circle Award and the Salon Book Award, as well as the Macallan Crime Writers Association Gold Dagger. He has also written two short story collections, a novella and a collection of essays, and was the founding fiction editor of Fence magazine. His writings have appeared in The New Yorker, Rolling Stone, McSweeney’s, and many other periodicals. He lives in Brooklyn, New York.