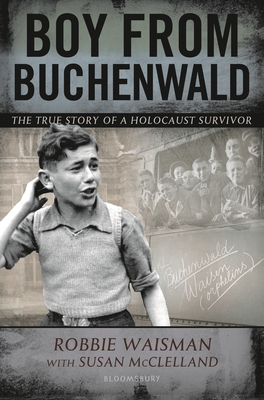 It was 1945 and Romek Wajsman had just been liberated from Buchenwald, a brutal concentration camp where more than 60,000 people were killed. He was starving, tortured, and had no idea where his family was-let alone if they were alive. Along with 472 other boys, including Elie Wiesel, these teens were dubbed “The Buchenwald Boys.” They were angry at the world for their abuse, and turned to violence: stealing, fighting, and struggling for power. Everything changed for Romek and the other boys when Albert Einstein and Rabbi Herschel Schacter brought them to a home for rehabilitation
Romek Wajsman, now Robbie Waisman, humanitarian and Canadian governor general award recipient, shares his remarkable story of transforming pain into resiliency and overcoming incredible loss to find incredible joy.

Susan McClelland is a freelance magazine journalist based in Toronto. She has won and been nominated for numerous investigative reporting and feature-writing awards, and is the recipient of the 2005 Amnesty International Media Award. www.susanmcclelland.com

" —The total disorientation and alone-ness of his newly liberated period provoke a chilling “What if it were me?” focus . . . . [A] moving personal narrative." —The Bulletin of the Center for Children’s Books