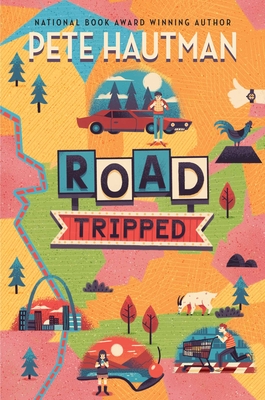 
Available from Our Distributor (Not in Store)
“Superb road trip novel. By turns introspective and humorous.” —Booklist (starred review)

In this captivating story about loss, love, and changing your ways, National Book Award­–winning author Pete Hautman imbues the classic road trip novel with clever wit and heartfelt musings about life and death.

Steven Gerald Gabel—a.k.a. Stiggy—needs to get out of Minnesota. His father recently took his own life, his mother is a shell of the person she used to be, and his sort-of-girlfriend ghosted him and skipped town. What does he have left to stick around for? Armed with his mom’s credit card and a tourist map of Great River Road, Stiggy sets off in his dad’s car.

The only problem is, life on his own isn’t exactly what he expected and, soon enough, he finds himself at a crossroads: keep running from his demons, or let them hitch a ride back home with him.
Pete Hautman is the author of National Book Award winner Godless, Sweetblood, Hole in the Sky, Stone Cold, the Flinkwater Chronicles, Road Tripped, Otherwood, Slider, and Mr. Was, which was nominated for an Edgar by the Mystery Writers of America, as well as several other novels for children and adults. He lives in Minnesota and Wisconsin.