The Kingdom of the Anglo-Saxons: The Wars of King Alfred 865-899 (Hardcover) 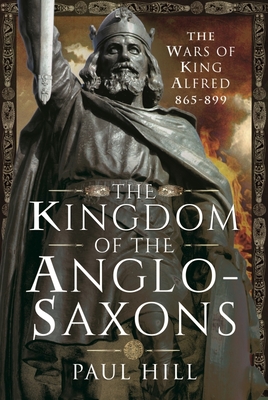 The Kingdom of the Anglo-Saxons: The Wars of King Alfred 865-899 (Hardcover)


Available from Our Distributor (Not in Store)
In this compelling military and political history of the Anglo-Saxon kingdom, Paul Hill explores England's birth amidst the devastation and fury of the Danish invasions of the ninth century. He provides insight into the English response to the new challenges of warfare in these years of turbulence and danger.

Alfred the Great, youngest son of King thelwulf, took control of the last surviving Anglo-Saxon kingdom, bringing Wessex and the 'English' parts of Mercia together into a new 'Kingdom of the Anglo-Saxons'. This is a story of betrayal and of vengeance, of turncoat oath-breakers and loyal commanders, of battles fought and won against the odds.

But above all, this is the story of how England came into being.

Warfare in Alfred's England changed from attritional set-piece battles to a grander strategic concern. This is explored, demonstrating how defense-in-depth fortification networks were built across the resurgent kingdom in the wake of Alfred's victory at Edington in 878. The arrival of new Danish armies into England in the 890s would lead to campaigns quite unlike those of the Great Heathen Army of the previous generation.

This is a human, as well as a military story: how a king demonstrated his right to rule was important. Alfred sought to secure the succession on his son Edward, who led his own forces as a young man in the 890s. But not everybody was happy in Alfred's England. Despite the ever-present threat from the Danes, the greatest challenge facing Alfred arose from his own kin, centered deep in the heart of ancient Wessex. Alfred knew very well that his was not the only branch of the family who claimed a right to rule.