I Hope This Helps: Comics and Cures for 21st Century Panic (Paperback) 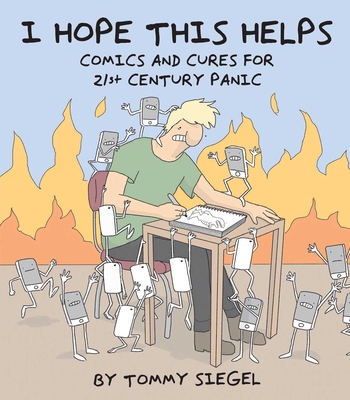 I Hope This Helps: Comics and Cures for 21st Century Panic (Paperback)


On Our Shelves Now
I Hope This Helps offers an emergency dose of laughter in book form. Tommy Siegel’s debut essay and comics collection is the perfect pandemic gift—an uplifting, topical, and deeply funny view of millennial culture, phone addiction, and coping with the extreme weirdness of 21st-century life.

Tommy Siegel's debut book collection includes 200+ pages of comics, essays, and extremely helpful guides to coping with 21st-century panic. With comics titled “Choose your social anxiety coping mechanism” and “What your coffee drink of choice says about you,” I Hope This Helps offers clever and sardonic commentary on our social media-driven culture, as well as a series of devastatingly funny relationship comics starring his popular Candy Hearts characters.

Tommy Siegel’s comics began as doodles in the back of a van as a touring rock musician, and quickly earned a viral global fanbase and shout-outs from cultural heavyweights including Ringo Starr, Tim Heidecker, Vic Berger, and Alexandria Ocasio-Cortez. With a perfect balance of absurd humor and insightful writing, I Hope This Helps outlines the journey from the author’s earliest "van doodles" all the way to the socially-distanced awkwardness of the present day.
Tommy Siegel is a cartoonist and musician who tries his best to juggle both pastimes with assistance from copious amounts of coffee. As lead guitarist and singer for his solo projects and his power pop trio Jukebox The Ghost, Tommy has played over 1,000 shows around the world, including festivals like Bonnaroo and Lollapalooza and late-night television programs like Letterman and Conan. As a cartoonist, his challenge to draw 500 consecutive days of comics led to a viral fanbase of hundreds of thousands worldwide.