Fire Cannot Kill a Dragon: Game of Thrones and the Official Untold Story of the Epic Series (Hardcover) 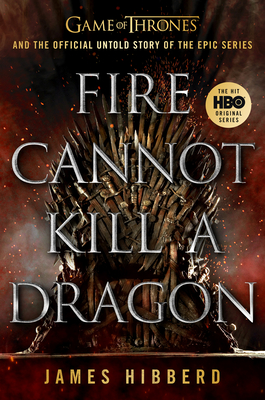 The perfect read and perfect gift for Game of Thrones fans

The official, definitive oral history of the blockbuster show from Entertainment Weekly’s James Hibberd, endorsed by George R. R. Martin himself (who calls it “an amazing read”), reveals the one Game of Thrones tale that has yet to be told: the thirteen-year behind-the-scenes struggle to make the show.

Fire Cannot Kill a Dragon shares the incredible, thrilling, uncensored story of Game of Thrones, from the creators' first meetings with George R. R. Martin and HBO through the series finale, including all the on-camera battles, off-camera efforts, and the many controversies in between. The book also features more than fifty candid new interviews, rare and stunning photos, and unprecedented access to the producers, cast, and crew who took an impossible idea and made it into the biggest show in the world.

James Hibberd is an award-winning entertainment journalist who has written thousands of stories covering the business of Hollywood across nearly two decades. He's currently an editor at large at Entertainment Weekly and was previously the TV editor at The Hollywood Reporter. Prior to covering entertainment, Hibberd made headlines in 2001 as a staff writer at Phoenix New Times when he risked imprisonment amid a legal battle versus county and federal authorities in order to protect a confidential source (and won). His freelance work has appeared in The New York Times, Salon, Cosmopolitan, Details, and The Best American Sports Writing. He lives in Austin, Texas.

“James Hibberd covered Game of Thrones from start to finish and he knows where all the bodies are buried. It's all here, in his oral history of the series: how it began, how it ended, dragons and direwolves, what went on in front of the cameras and what went on behind the scenes, the triumphs and the stumbles, the tough decisions, the forks in the road, the reasons why. Actors, directors, showrunners, producers, executives, even me. . . . Fire Cannot Kill a Dragon has it all, everything you ever wanted to know. Game of Thrones was an amazing ride. Fire Cannot Kill a Dragon is an amazing read.”—George R. R. Martin

“A great read, informative and insightful . . . Hibberd’s impressive reach also helps; he speaks to just about every major player in the show’s orbit, from actors like Peter Dinklage, Emilia Clarke, and Kit Harington to directors like Neil Marshall and Miguel Sapochnik, the people responsible for some of the show’s most ambitious episodes.”—The A.V. Club

“After spending a decade religiously covering the HBO fantasy hit series, the Entertainment Weekly writer delivers all of the behind-the-scenes secrets of Westeros in a must-read for fans. With over fifty interviews to offer new insights and never-before-seen photos from the secretive set, Hibberd might just become King in the North (Pole) this holiday.”—E! News

“This book will change how you see Game of Thrones.”—Wired