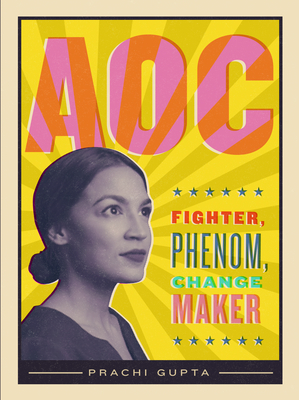 
Available from Our Distributor (Not in Store)
“We are going to rock the world.” —Alexandria Ocasio-Cortez

Born in the Bronx and raised in the suburbs of Westchester County, New York, Alexandria Ocasio-Cortez witnessed firsthand how a person’s zip code can shape their destiny. That early exposure to income inequality fueled a passion for change that, in turn, led her to take on—and defeat—a ten-term incumbent to become the youngest woman ever elected to Congress. Now a target for the right, she is an inspiration to millions of millennial voters, women of color, and progressives.

A celebratory biography that tells the blow-by-blow account of AOC’s extraordinary rise from bartender to political rock star, AOC is a compelling look at Alexandria Ocasio-Cortez: who she is, what she stands for, and the movement that she’s energized.
Prachi Gupta is a journalist in New York. She was a senior reporter at Jezebel and co-host of Jezebel's politics podcast, Big Time Dicks. Prior to that, she covered the 2016 election for Cosmopolitan.com, where she interviewed figures like Hillary Clinton, Ivanka Trump, and Michelle Obama, and reported on the refugee crisis in the Middle East. Her work has appeared in IndieWire and Salon.com, and she has offered commentary on NPR, CNBC, and Channel 4’s documentary on Ivanka Trump.
“Through the unique lens of a sister of color, Prachi Gupta tells the story of the phenomenal rise of an unlikely symbol of hope.” —Amani Al-Khatahtbeh, founder of MuslimGirl.com

“Supplemented by photos and pull quotes, Gupta’s reporting is as sharp and galvanizing as her subject. A beautiful tribute to a contemporary firebrand.” —Booklist

“Prachi is an incredibly talented writer, and her book on AOC is excellent.” —Hitha Palepu, founder of Hitha on the Go, CEO of Rho Pharmaceuticals, and author of How to Pack: Travel Smart for Any Trip and 5 Smart Reads newsletter