Where Misfits Fit: Counterculture and Influence in the Ozarks (Paperback) 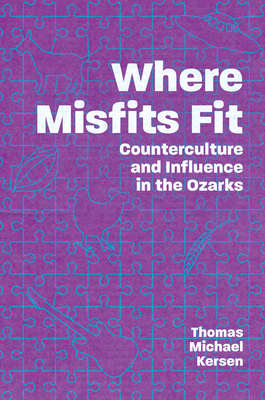 Where Misfits Fit: Counterculture and Influence in the Ozarks (Paperback)

All regions and places are unique in their own way, but the Ozarks have an enduring place in American culture. Studying the Ozarks offers the ability to explore American life through the lens of one of the last remaining cultural frontiers in American society. Perhaps because the Ozarks were relatively isolated from mainstream American society, or were at least relegated to the margins of it, their identity and culture are liminal and oftentimes counter to mainstream culture. Whatever the case, looking at the Ozarks offers insights into changing ideas about what it means to be an American and, more specifically, a special type of southerner. In Where Misfits Fit: Counterculture and Influence in the Ozarks, Thomas Michael Kersen explores the people who made a home in the Ozarks and the ways they contributed to American popular culture. Drawing on a wide variety of sources, Kersen argues the area attracts and even nurtures people and groups on the margins of the mainstream. These include UFO enthusiasts, cults, musical troupes, and back-to-the-land groups. Kersen examines how the Ozarks became a haven for creative, innovative, even nutty people to express themselves--a place where community could be reimagined in a variety of ways. It is in these communities that communitas, or a deep social connection, emerges. Each of the nine chapters focuses on a facet of the Ozarks, and Kersen often compares two or more cases to generate new insights and questions. Chapters examine real and imagined identity and highlight how the area has contributed to popular culture through analysis of the Eureka Springs energy vortex, fictional characters like Li'l Abner, cultic activity, environmentally minded communes, and the development of rockabilly music and near-communal rock bands such as Black Oak Arkansas.
Thomas Michael Kersen is associate professor of sociology at Jackson State University. He earned his PhD from Mississippi State University.