A Trace of Poison: A Riveting Historical Mystery Set in the Home of Agatha Christie (A Phyllida Bright Mystery #2) (Hardcover) 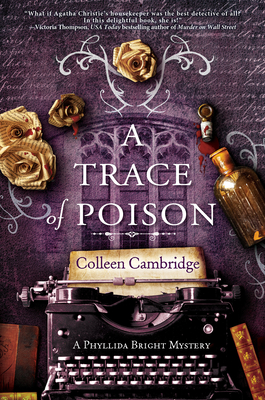 A Trace of Poison: A Riveting Historical Mystery Set in the Home of Agatha Christie (A Phyllida Bright Mystery #2) (Hardcover)

This is book number 2 in the A Phyllida Bright Mystery series.

“Balances Downton Abbey–style period charm with a tight plot that twists and turns right until the end… a plot that would satisfy Poirot.” – Library Journal

In this captivating English murder mystery from an acclaimed author, Agatha Christie’s housekeeper must uncover the killer amongst a throng of crime writers.

In England’s stately manor houses, murder is not generally a topic for polite conversation. Mallowan Hall, home to Agatha Christie and her husband, Max, is the exception. And housekeeper Phyllida Bright delights in discussing gory plot details with her friend and employer . . .

The neighboring village of Listleigh has also become a hub of grisly goings-on, thanks to a Murder Fête organized to benefit a local orphanage. Members of The Detection Club—a group of celebrated authors such as G.K. Chesterton, Dorothy L. Sayers, and Agatha herself—will congregate for charitable events, including a writing contest for aspiring authors. The winner gets an international publishing contract, and entrants have gathered for a cocktail party—managed by the inimitable Phyllida—when murder strikes too close even for her comfort.

It seems the victim imbibed a poisoned cocktail intended for Alastair Whittlesby, president of the local writers’ club. The insufferable Whittlesby is thought to be a shoo-in for the prize, and ambition is certainly a worthy motive. But narrowing down these suspects could leave even Phyllida’s favorite fictional detective, M. Poirot, twirling his mustache in frustration.

It’s a mystery too intriguing for Phyllida to resist, but one fraught with duplicity and danger, for every guest is an expert in murder—and how to get away with it . . .
Colleen Cambridge is the New York Times and USA Today bestselling author of the Phyllida Bright Mysteries, the first of which, Murder at Mallowan Hall, was an Indie Next Pick and Agatha Award finalist. An accomplished historian whose meticulously researched novels appeal to fans of historical fiction and mysteries alike, she also writes under the pennames C.M. Gleason and Colleen Gleason. She lives in the Midwest and can be found online at ColleenCambridge.com.
Praise for A Trace of Poison

“Cambridge balances Downton Abbey–style period charm with a tight plot that twists and turns right until the end, with utter believability… The real-life historical players make only brief cameos, but Cambridge creates such a compelling cast of fictional characters that they are hardly missed. Reminiscent of Jessica Ellicott’s “Beryl & Edwina” series, this novel will please readers with its historical world and a plot that would satisfy Poirot.” —Library Journal

“Cambridge weaves in just the right amount of historical detail and references to classic Christie novels while placing Phyllida and her intelligent sleuthing skills front and center…Fans of traditional mysteries will appreciate the author’s sometimes tongue-in-cheek adherence to the conventions of the genre, particularly the denouement where all is revealed. Dame Agatha would be proud.”
—Publishers Weekly


Praise for Murder at Mallowan Hall

“It’s obvious Cambridge had a blast writing the book, set in 1930s Devonshire, and her fun is infectious. Phyllida is a confident first-time detective, modeling herself on her hero, Christie’s Hercule Poirot, who outshines all suitors who have come her way. Phyllida’s smarts and assurance don’t save her from making mistakes, some of which delay solving the case. Paced at a gallop, it’s an entertaining read. Recommended.” —Historical Novel Society

“[A] solid series launch from Cambridge…Readers will want to see more of the clever Phyllida.”
—Publishers Weekly

“Colleen Cambridge has done her homework on English society and provides us with a clear picture of her characters, where they live, and how they act. She does well at capturing the era with all the right language and dialects. It’s a good cozy to read with a cup of tea on the patio.”
—New York Journal of Books

“A delicious combination of Downton Abbey and a meta-play on a Christie novel (obviously, The Body in the Library). The Downton Abbey bit is Cambridge’s attention to 1920's domestic detail and the way Mrs. Bright runs the household...Agatha Christie the character plays a very peripheral part in the proceedings, but Agatha Christie the writer haunts every page of this delightful book that both pays homage to the Queen of Crime, but also embroiders on her work with a fresh character and a fresh look at a part of her life. This is a wonderful series debut.” —Mystery Scene Magazine

“The premise of a crime-solving housekeeper to the one and only Agatha Christie is full of promise and portent.  It’s such a pleasure when the first book in a new mystery series is well-crafted and I look forward to reading more of Phyllida Bright’s adventures in detection.” —Criminal Element

"What if Agatha Christie’s housekeeper was the best detective of all? In this delightful book, she is! You will love watching Phyllida spot the clues the authorities miss when a dead body shows up in Agatha’s library. An outstanding start to what promises to be a winning new series." —Victoria Thompson, USA Today Bestselling Author of Murder on Wall Street

“Cambridge pens a thoroughly intriguing mystery, told in a unique manner from the perspective of the staff belowstairs rather than the upper class above, in this splendid first installment in a new series. Her heroine, Phyllida Bright, is the confident, shrewd, and eminently capable housekeeper for none other than the grand dame of mystery herself—Agatha Christie—and a great admirer of Christie’s fictional detective Poirot, whose methods she seeks to emulate. Fans of Tessa Arlen and Jennifer Ashley will be delighted.” —Anna Lee Huber, bestselling author of the Verity Kent Mysteries

“Readers of traditional mysteries will love Murder at Mallowan Hall. Phyllida Bright, Agatha Christie's housekeeper, is a superb detective who overcomes the interruptions of her typical workday to best the local investigators in solving a murder in Ms. Christie's library.” —Denise Phillips, Gathering Volumes (Perrysburg, OH)

“If you stay up to finish Agatha Christie books or watch the Miss Marple or Poirot series, you will love this new series based in Miss Christie’s world. When a mystery man is murdered in Agatha Christie’s personal library, her head housekeeper, Phyllida Bright, is determined to solve the case and return the house to normal. This is the coziest of mysteries and a lovely tribute to the queen of mysteries herself.” —Tina Green-Bevington, Bay Books (Suttons Bay, MI)

“Murder at Mallowan Hall is a well-plotted, often humorous, entertaining country house murder mystery in the classic style, with the twist being that it is set in the country home of detective novelist Agatha Christie. The main character is the no-nonsense housekeeper, Phyllida Bright, who discovers the body of an uninvited guest in the hall's library and sets out to solve the mystery.”
—Carol Schneck Varner, Schuler Books (Okemos, MI)

“Think of all that you could want from an English countryside manor murder mystery, and this novel is it.  From a cast of gentrified dinner party guests to the charming servants and staff below stairs, the questionably competent local law enforcement to the mysterious dead man in the library, Murder at Mallowan Hall has it all.  Then consider it is set at the home of the great Agatha Christie herself! Mrs. Bright is my new favorite amateur detective and I cannot wait for the next installment in this engrossing historical mystery series!” —Lori-Jo Scott, Island Bookstore (Kitty Hawk, NC)

"Great cozy mystery for fans of Agatha Christie and Downton Abbey.  Wonderful first mystery with a great detective in Agatha Christie's maid. I hope there is more to come, we need to learn Phyllida Bright's backstory, and where she learned to be such a badass.” —Vikki Bell, Broad Bay Café (Waldoboro, ME)

“A delightful murder mystery!  Murder at Mallowan Hall felt like a combination of Clue, Upstairs Downstairs, and of course Agatha Christie.  I look forward to seeing what sleuthing Phyllida takes on next!” —Stefanie Lynn, The Kennett Bookhouse (Kennett Square, PA)

“Happy news for cozy mystery lovers—a truly interesting new amateur detective has arrived. Phyllida Bright, housekeeper for none other than Agatha Christie herself, quickly gets enmeshed in solving not one but two murders. With sly asides to Christie's own novels, this series starter holds its own as an engaging and well-crafted story. I'm looking forward to her next adventure.” —Jan Blodgett, Main Street Books (Davidson, NC)

“Wonderful premise of the upstairs/downstairs workings in the country home of Agatha Christie. Her housekeeper is devoted to her as they served together during the war. When a dead body appears during a weekend house party, Mrs. Bright takes charge of the situation and mirrors the skills of her other hero, Hercule Poirot.” —Kathy Judge, Bound2please Books (Orange, VA)

"Agatha Christie’s indomitable and mysterious housekeeper Phyllida Bright takes on a killer in this exciting new series from Colleen Cambridge. Fans of historical mysteries—and Christie herself—will love this well-imagined homage, and the clever twists and numerous suspects will keep readers on their toes. I’m already looking forward to Phyllida’s next adventure!" —Erica Ruth Neubauer, author of the Jane Wunderly Mysteries

“[A] solid series launch…Readers will want to see more of the clever Phyllida.” —Publishers Weekly