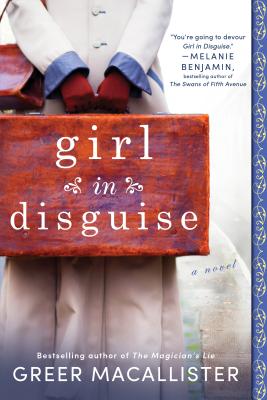 “'I'm a resourceful and strong young woman, there is no other option.' That's the concept behind Greer Macallister's telling of the real, honest-to-goodness life of Kate Warne, the first female Pinkerton detective. Kate is a widow with no money and no honest prospects, and she is desperate. Her unconventional upbringing taught her flexibility, and, spotting Pinkerton's ad, she won't take no for an answer. She is hired as an agent and, having proved her value, is soon hiring and training more female agents and serving as a spy as the U.S. prepares to split apart. Girl in Disguise is a delight: entertaining and a sure nonstop read.”
— Becky Milner (M), Vintage Books, Vancouver, WA

“Macallister has penned a great story featuring a strong, independent woman. Kate purposely pursues a career with Pinkerton, as she loves the life of a spy operative. I loved Macallister’s depiction of the time period right before and during the Civil War, and I really enjoyed the description of detective work in its early years. Great read!”
— Karin Wilson, Page and Palette, Fairhope, AL

Inspired by the real story of investigator Kate Warne, this spirited novel follows the detective's rise during one of the nation's times of crisis, bringing to life a fiercely independent woman whose forgotten triumphs helped sway the fate of the country.

With no money and no husband, Kate Warne finds herself with few choices. The streets of 1856 Chicago offer a desperate widow mostly trouble and ruin--unless that widow has a knack for manipulation and an unusually quick mind. In a bold move that no other woman has tried, Kate convinces the legendary Allan Pinkerton to hire her as a detective.

Battling criminals and coworkers alike, Kate immerses herself in the dangerous life of an operative, winning the right to tackle some of the agency's toughest investigations. But is the woman she's becoming--capable of any and all lies, swapping identities like dresses--the true Kate? Or has the real disguise been the good girl she always thought she was?