In the Zone (The Kicks) (Paperback) 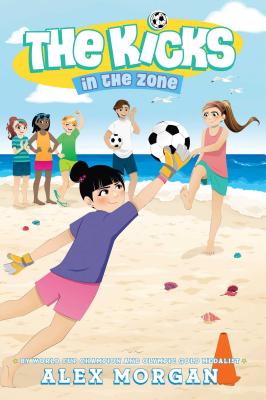 In the Zone (The Kicks) (Paperback)

This is book number 8 in the The Kicks series.

Spring season continues and the Kicks are working their hardest to be champions. But Emma’s confidence takes a dive after tripping and letting a shot go into the goal. Embarrassed by the blunder, she’s not sure if she’s cut out to be a goalie.

Devin tries to help Emma, but she’s dealing with uncertainties of her own. The cute new boy at school asks Jessi to go to the movies with him and some other friends, and she accepts, leaving Devin, Steven, and Cody behind. Does Jessi not like Cody anymore and what does this mean for Devin and Steven?

With everything so uncertain, will the Kicks be able to stay in the soccer zone?
Alex Morgan became the youngest member of the US women’s national soccer team in 2009 and competed in the 2011 FIFA World Cup. She was the first overall pick in the 2011 Women’s Professional Soccer draft and landed a spot on the US Olympic women’s soccer team in 2012. At the 2012 Summer Olympic Games, held in London, Morgan won her first Olympic medal, a gold, with the American team. In 2015, she achieved her lifelong goal of winning a World Cup trophy, in the most-watched soccer match in US history. She now plays for the Orlando Pride in Orlando, Florida.