The Found and the Lost: The Collected Novellas of Ursula K. Le Guin (Paperback) 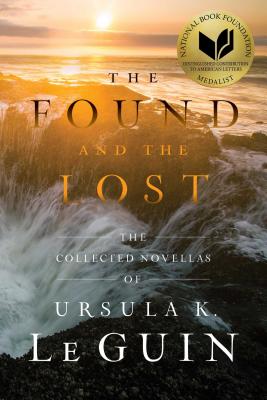 The Found and the Lost: The Collected Novellas of Ursula K. Le Guin (Paperback)


Available from Our Distributor (Not in Store)
Every novella by Ursula K. Le Guin, an icon in American literature, collected for the first time in one breathtaking volume.

Ursula K. Le Guin has won multiple prizes and accolades from the Medal for Distinguished Contribution to American Letters to the Newbery Honor, the Nebula, Hugo, World Fantasy, and PEN/Malamud Awards. She has had her work collected over the years, but never as a complete retrospective of her longer works as represented in the wonderful The Found and the Lost.

Includes:
-Vaster Than Empires and More Slow
-Buffalo Gals, Won't You Come Out Tonight
-Hernes
-The Matter of Seggri
-Another Story or a Fisherman of the Inland Sea
-Forgiveness Day
-A Man of the People
-A Woman's Liberation
-Old Music and the Slave Women
-The Finder
-On the High Marsh
-Dragonfly
-Paradises Lost

This collection is a literary treasure chest that belongs in every home library.
Ursula K. Le Guin (1929–2018) was the celebrated author of twenty-three novels, twelve volumes of short stories, eleven volumes of poetry, thirteen children’s books, five essay collections, and four works of translation. Her acclaimed books received the Hugo, Nebula, Endeavor, Locus, Otherwise, Theodore Sturgeon, PEN/Malamud, and National Book Awards; a Newbery Honor; and the Pushcart and Janet Heidinger Kafka Prizes, among others. In 2014, she was awarded the National Book Foundation Medal for Distinguished Contribution to American Letters, and in 2016 joined the short list of authors to be published in their lifetimes by the Library of America. Le Guin was also the recipient of the Association for Library Service to Children’s May Hill Arbuthnot Honor Lecture Award and the Margaret A. Edwards Award. She received lifetime achievement awards from the World Fantasy Convention, Los Angeles Times, Pacific Northwest Booksellers Association, and Willamette Writers, as well as the Science Fiction and Fantasy Writers of America Grand Master Award and the Library of Congress Living Legend Award. Her website is UrsulaKLeGuin.com.