Straight from the Heart (Paperback) 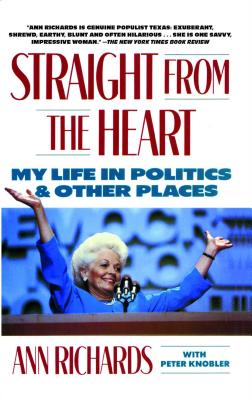 Straight from the Heart (Paperback)


Available from Our Distributor (Not in Store)
Ann Richards—now the subject of the Broadway play Ann—tells her life story in her own trademark candor and spicy humor.

Straight from the Heart is Ann Richards’s story, told with the candor and spicy humor that were her trademarks. Born in a tiny town near Waco, Texas, she entered politics when her husband wouldn’t—and went on to become state treasurer, the first woman elected to statewide office in Texas in fifty years. She had her victories and her battles (the breakup of a thirty-year marriage and a bout with alcohol), but her love of Texas and Texas politics made her who she was.

This extraordinary memoir by one of the nation’s leading politicians proves the wisdom of her observation that women “can have a good and wonderful life, but that it only begins when they accept responsibility for it, not when they expect someone else to make it happen.” Richards talks openly about the course of her life and the choices she made on the way. Her hard-won triumphs and savvy political career provide inspiring examples for all.
Ann Richards (September 1, 1933 – September 13, 2006) was an American politician and the 45th Governor of Texas. She first came to national attention as the state treasurer of Texas, when she delivered the keynote address at the 1988 Democratic National Convention. Richards served as the 45th Governor of Texas from 1991 to 1995.
"An entertaining read offering plenty of anecdotal fare...an all-you-can-eat political buffet."
— Dallas Times Herald

"She was funny—funnier than hell...I'd like to listen to the Texas gal any time she wants to talk."
— Barry Goldwater

"Ann Richards is a dynamite lady—beautiful, funny, smart as a whip and as down-home as they come."
— The El Paso Times