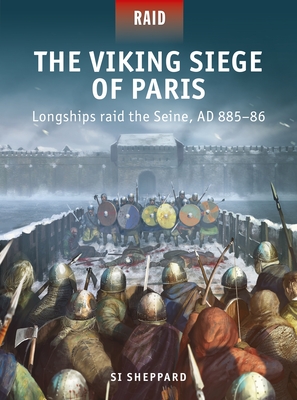 This is the detailed story of the Vikings' expedition to conquer medieval Paris - a brutal year-long siege which ultimately brought about the foundation of modern France.

The Vikings' siege of Paris in 885–86 was a turning point in the history of both Paris and France. In 885, a year after Charles the Fat was crowned King of the Franks, Danish Vikings sailed up the Seine demanding tribute. The Franks' refusal prompted the Vikings to lay siege to Paris, which was initially defended by only 200 men under Odo, Count of Paris, and seemingly in a poor state to defend against the Viking warriors in their fleet of hundreds of longships.

Paris was centered around the medieval Île de la Cité, the natural island now in the heart of the city, fortified with bridges and towers. The Vikings attempted to break the Parisian defenders, but the city itself still held out, and after a year Charles' army arrived to lift the siege. But Charles then allowed the Vikings to sail upstream against the revolting Burgundians. Outraged at this betrayal, the Parisians refused to let the Vikings return home via the Seine, forcing them to portage their boats overland to the Marne in order to reach the North Sea. When Charles died in 888, the people of the of the Île de France elected Odo as their king. The resistance of Paris therefore marked the end of the Carolingian line and the birth of a new kingdom.

This fully illustrated volume, accompanied with maps and strategic diagrams tells the full story of the Vikings' expedition to conquer medieval Paris, highlighting a key moment in the history of France and its foundation as a nation.

London-born Si Sheppard completed his Bachelors and Masters degrees in New Zealand before receiving his doctorate from Johns Hopkins University in the United States. He is currently an associate professor of political science and international relations at Long Island University in Brooklyn, New York, and has written several titles for Osprey focusing on the interrelationship between geography, technology, and strategy.

Edouard Groult grew up inspired by watching historical documentaries with his father and developed a fascination for historical and fantasy art. Following art studies in both Paris and Belgium he worked as a concept artist in the videogame industry and in recent years has also undertaken historical commissions while working as a freelancer for historical magazines. He lives and works in Oxford, UK.