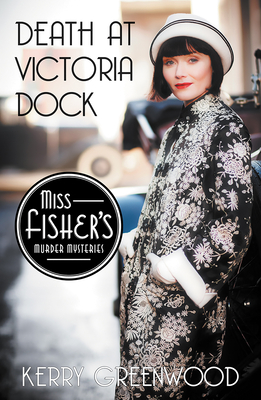 From the author of the bestselling Phryne Fisher Series comes Death at Victoria Dock, the next historical mystery featuring the wit and authenticity of Miss Fisher. When a terrible crime hits a little too close to home, Phryne will stop at nothing to seek out the truth.

"Those who like their heroines resourceful and their mystery plots leavened with humor will read this with pleasure."—Publishers Weekly

Looking for a thrilling detective novel? This book is for you:

Driving home late one night, Phryne Fisher is surprised when someone shoots out her windscreen. She alights to finds a pretty young man with an anarchist tattoo dying on the tarmac just outside the dock gates. Phryne does all she can to help, but soon realizes she holds death in her hands. He bleeds to death in her arms... and all over her silk shirt.

Enraged by the loss of the clothing, the damage to her car, and this senseless waste of human life, Phryne promises to find out who is responsible. These kinds of crimes simply don't happen in Victoria, Australia. But she doesn't yet know how deeply into the mire she'll have to go: bank robbery, tattoo parlours, pubs, spiritualist halls, and Anarchists. Then when someone kidnaps her cherished companion, Dot, Phryne will stop at nothing to retrieve her.

Kerry Greenwood was born in the Melbourne suburb of Footscray and after wandering far and wide, she returned to live there. She has degrees in English and Law from Melbourne University and was admitted to the legal profession on the 1st April 1982, a day which she finds both soothing and significant. Kerry has written three series, a number of plays, including The Troubadours with Stephen D’Arcy, is an award-winning children’s writer and has edited and contributed to several anthologies. The Phryne Fisher series (pronounced Fry-knee, to rhyme with briny) began in 1989 with Cocaine Blues which was a great success. Kerry has written twenty books in this series with no sign yet of Miss Fisher hanging up her pearl-handled pistol. Kerry says that as long as people want to read them, she can keep writing them. In 2003 Kerry won the Lifetime Achievement Award from the Australian Association.