Before the Fall (Large Print / Hardcover) 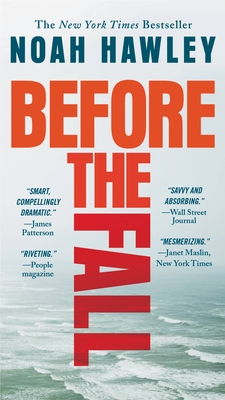 By Noah Hawley
$37.00
Available from Our Distributor (Not in Store)

“When a private plane plunges into the ocean off Martha's Vineyard, the media and the government want answers. The two survivors -- a middle-aged artist along for the ride and the 4-year-old son of a prominent and powerful family - have little to say. Before the Fall takes the reader on a thrilling ride through the past lives of the other passengers and the aftermath of the crash. As the deepest secrets of the wealthy and those who surround them surface, no one is safe. A brilliant and relentless thriller.”
— Geoffrey Jennings (M), Rainy Day Books, Fairway, KS

On a foggy summer night, eleven people--ten privileged, one down-on-his-luck painter--depart Martha's Vineyard on a private jet headed for New York. Sixteen minutes later, the unthinkable happens: the plane plunges into the ocean. The only survivors are the painter Scott Burroughs and a four-year-old boy, who is now the last remaining member of an immensely wealthy and powerful media mogul's family.

Was it by chance that so many influential people perished? Or was something more sinister at work? A storm of media attention brings Scott fame that quickly morphs into notoriety and accusations, and he scrambles to salvage truth from the wreckage. Amid trauma and chaos, the fragile relationship between Scott and the young boy grows and glows at the heart of this stunning novel, raising questions of fate, morality, and the inextricable ties that bind us together.

From the Award-Winning Creator of Fargo Comes "One of the Year's Best Suspense Novels" (New York Times).

Noah Hawley is an Emmy, Golden Globe, PEN, Critics' Choice, and Peabody Award-winning author, screenwriter, and producer. He has published four novels and penned the script for the feature film Lies and Alibis. He created, executive produced, and served as showrunner for ABC's My Generation and The Unusuals and was a writer and producer on the hit series Bones. Hawley is currently executive producer, award-winning series, Fargo, and Legion from FX Productions and Marvel Television.

"This is one of the year's best suspense novels, a mesmerizing, surprise-jammed mystery that works purely on its own, character-driven terms....Mr. Hawley has made it very, very easy to race through his book in a state of breathless suspense."—Janet Maslin, New York Times

"BEFORE THE FALL is a ravishing and riveting beauty of a thriller. It's also a deep exploration of desire, betrayal, creation, family, fate, mortality, and rebirth. It's one part Dennis Lehane, one part Dostoevsky. I was spellbound from first page to last; I haven't fully recovered yet."—Michael Cunningham, Pulitzer Prize-winning author of The Hours

"Noah Hawley really knows how to keep a reader turning the pages, but there's more to the novel than suspense. On one hand, BEFORE THE FALL is a complex, compulsively readable thrill ride of a novel. On the other hand, it is an exploration of the human condition, a meditation on the vagaries of human nature, the dark side of celebrity, the nature of art, the power of hope and the danger of an unchecked media. The combination is a potent, gritty thriller that exposes the high cost of news as entertainment and the randomness of fate."—Kristin Hannah, New York Times Book Review

"[A] terrific thriller...an irresistible mystery.. a tale that's both an intriguing puzzle and a painful story of human loss."—Patrick Anderson, Washington Post

"Imagine that Agatha Christie had set a closed-room mystery on an airplane and included Wall Street and entertainment executive types in her lineup of suspects. Now imagine that airplane crashing into the Atlantic before the story even gets going....Mr. Hawley, the expert TV showrunner, obviously had the skills to pull this off."—New York Times, "The Top Books of 2016"

"I started and finished BEFORE THE FALL in one day. That begins to tell you what kind of smart, compellingly dramatic read it is.

"BEFORE THE FALL is an astonishing, character-driven tour-de-force. The story is a multi-layered, immersive examination of truth, relationships, and our unquenchable thirst for the media's immediate explanation of unfathomable tragedy."—Karin Slaughter, #1 internationally bestselling author

"Savvy and absorbing... cathartic...BEFORE THE FALLis about the gulf that separates perception and truth, and the people who fall into it."—Sam Sacks, Wall Street Journal

"BEFORE THE FALL kicks ass. A surefire summer read."
—Justin Cronin, New York Times bestselling author of The Passage and City of Mirrors

"Like the successful screenwriter that he is, Hawley piles on enough intrigues and plot complications to keep you hooked."—Kirkus Reviews

"This isn't just a good novel; it's a great one. I trusted no one in these pages, yet somehow cared about them all. BEFORE THE FALL brings a serrated edge to every character, every insight, and every wicked twist."—Brad Meltzer, bestselling author of The President's Shadow

"Noah Hawley soon veers his highly entertaining novel into an insightful look at families, revenge and media intrusion...Hawley invests the same care with a soupcon of dark humor into BEFORE THE FALL as he does on the TV series 'Fargo'...superb and cleverly constructed."—Associated Press

"A remarkable and memorable accomplishment by any standard...BEFORE THE FALL is brilliantly constructed and wonderfully told.... a tale that will haunt you long after you read the last page, even as you wish the narrative was twice as long, for all the right reasons."—Book Reporter

"Compulsively written and involving, BEFORE THE FALL is a stunning inquiry into human drive and desire...A powerful and genuinely surprising work."—The Saturday Star

"Abundant chills and thrills...Noah Hawley's novel grabs you by the throat and won't let go...BEFORE THE FALL is storytelling at its best, as Hawley presents a range of diverse characters with rich histories... Seeds of doubt are cast in what is sure to be the summer book you won't want to miss."—The Missourian

"In the hands of a writer like Noah Hawley, who knows how to build tension from mundane moments, it is a remarkable thriller that most readers will find difficult to put down...it moves toward a breathless ending."—The Washington Times

"A complex exploration of human nature in an age of celebrity."—Pittsburgh Post-Gazette

"Won [our] hearts and minds...it will be the big talker of the summer."—New York Post, "Summer's Hottest Reads"

"[The] thriller of the summer."—The Baltimore Sun

"The crash and the flashbacks recall Lost and Thornton Wilder's Pulitzer-winning novel, The Bridge Over San Luis Rey, and Scott's travails are the lot of every hero in a conspiratorial thriller going back to The 39 Steps."—Slate

"BEFORE THE FALL will seize you on the first page and never let you go, as you follow the story of a plane crash and the complicated and confusing investigation about why it happened."—Vanity Fair, "The 5 Must-Read Books for the Last Five Weeks of Summer"

"A riveting summer read...the author manages to draw out beauty from the heartbreak embodied within the characters. BEFORE THE FALL poses ubiquitous questions about existence, while maintaining a fast-paced, fascinating, and ultimately life-affirming plot."—Woodbury Magazine

"[An] intelligent and majestically paced story... Hawley has provided his fans with the ultimate irony: a best-seller that is also a Marxist critique."—Dallas Morning News

"A taut and expertly paced suspense novel. Hawley's fifth book delivers in so many ways: a cast of well-drawn characters, feints, red herrings and dogged investigators who eventually uncover the truth...this one keeps readers guessing until the final, tragic unveiling....in nerve-racking and poignant detail."—RealClearBooks, "This Summer's Best Thriller"

"A thoughtful and compelling page-turner....Hawley's writing is taut and clear, his characters richly developed...Readers may be moved to stand up and cheer."—New York Journal of Books

"A literary suspense novel with both a brain and a heart, Before the Fall is a searing examination of the nature of truth. With masterful character development and a well-sculpted plot line, Hawley takes us on a thrill ride of a story while raising vital questions about the role and responsibility of the media today."—Powells, "1 of 10 books sent to President Elect Trump"

"This fast-paced suspense novel by the creator of Fargo will keep you on the edge of your seat."—People

"Brimming with three-dimensional characters, BEFORE THE FALL leads the reader down rabbit hole after rabbit hole in an electrifying mystery."—PasteMagazine.com, "Best Novels of 2016"

"Noah Hawley's BEFORE THE FALL isn't a typical mystery. Perhaps that's why I couldn't put it down."—TheAtlantic.com

"Mystery, conspiracy and a plane crash on a foggy night...juicy."—Parade Magazine

"A read-in-one-beach-day kind of book...A true page-turner, BEFORE THE FALL will leave you guessing until the final moments of the crash, and the final pages of the book."—Bustle

"The story's utterly engrossing plot that twists between past and present, ultimately heightening the mystery and suspense, is practically made for the big screen."—Domino Magazine

"The best mystery I have read this year...extremely intense...a page turner...a carefully crafted character study...[that] delivers far more than a plot driven thriller. We get an insight into the workings of the minds of all the characters, and indeed, the workings of Noah Hawley's mind as well."—Cyberlibrarian