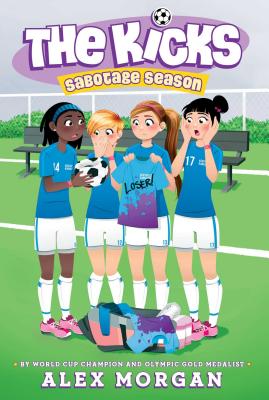 This is book number 2 in the The Kicks series.

The Kicks’ championship hopes are being sabotaged in the second book in a series that celebrates confidence and teamwork, from star soccer player and Olympic gold medalist Alex Morgan.

Things are going wrong left and right for the Kentville girls’ soccer team, and Devin’s sure the girls from their rival team, the Pinewood Panthers, are behind the many mishaps. Can Devin get to the bottom of the mystery and stop the sabotage before her team’s championship hopes disappear for good?
Alex Morgan became the youngest member of the US women’s national soccer team in 2009 and competed in the 2011 FIFA World Cup. She was the first overall pick in the 2011 Women’s Professional Soccer draft and landed a spot on the US Olympic women’s soccer team in 2012. At the 2012 Summer Olympic Games, held in London, Morgan won her first Olympic medal, a gold, with the American team. In 2015, she achieved her lifelong goal of winning a World Cup trophy, in the most-watched soccer match in US history. She now plays for the Orlando Pride in Orlando, Florida.
"[The] lively first-person narrative incorporates plenty of soccer and daily-life details while highlighting themes about the importance of teamwork, good sportsmanship, and maintaining perspectiive about what matters--from playing your best to friendship."
— Booklist