Saving the Team (The Kicks) (Paperback) 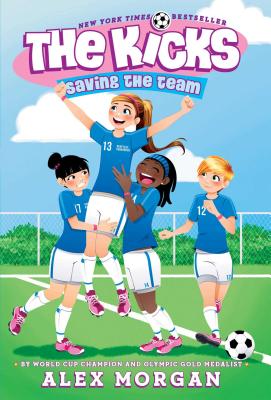 Saving the Team (The Kicks) (Paperback)

This is book number 1 in the The Kicks series.

From star soccer player and Olympic gold medalist Alex Morgan comes the New York Times bestselling first book in an empowering, fun-filled middle grade series about believing in yourself and working as a team.

Twelve-year-old Devin loves to play soccer. If she hadn’t just left Connecticut to move across the country, she would have been named seventh-grade captain on her school soccer team.

But now that Devin is starting seventh grade in Kentville, California, all bets are off. After all, some of the best players on the US national team come from California. She’s sure to have stiff competition. Or so she thinks.

When Devin shows up for tryouts, she discovers that the Kentville Kangaroos—otherwise known as the Kicks—are an absolute mess. Their coach couldn’t care less whether the girls win or lose. And Devin is easily one of the most talented players.

The good news is, Devin quickly makes friends with funny, outgoing Jessi; shy but sweet Zoe; and klutzy Emma. Can Devin and her newfound friends pull together and save the team from itself?
Alex Morgan became the youngest member of the US women’s national soccer team in 2009 and competed in the 2011 FIFA World Cup. She was the first overall pick in the 2011 Women’s Professional Soccer draft and landed a spot on the US Olympic women’s soccer team in 2012. At the 2012 Summer Olympic Games, held in London, Morgan won her first Olympic medal, a gold, with the American team. In 2015, she achieved her lifelong goal of winning a World Cup trophy, in the most-watched soccer match in US history. She now plays for the Orlando Pride in Orlando, Florida.