Suffrage at 100: Women in American Politics Since 1920 (Paperback) 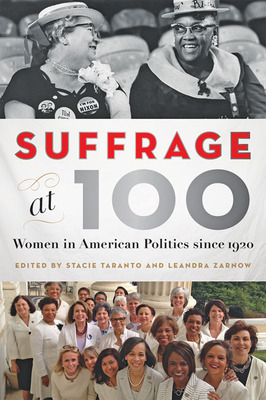 Suffrage at 100: Women in American Politics Since 1920 (Paperback)

Suffrage at 100 looks at women's engagement in US electoral politics and government over the one hundred years since the ratification of the Nineteenth Amendment.

In the 2018 midterm elections, 102 women were elected to the House and 14 to the Senate--a record for both bodies. And yet nearly a century after the ratification of the Nineteenth Amendment, the notion of congressional gender parity by 2020--a stated goal of the National Women's Political Caucus at the time of its founding in 1971--remains a distant ideal. In Suffrage at 100, Stacie Taranto and Leandra Zarnow bring together twenty-two scholars to take stock of women's engagement in electoral politics over the past one hundred years.

This is the first wide-ranging collection to historically examine women's full political engagement in and beyond electoral office since they gained a constitutional right to vote. The book explores why women's access to, and influence on, political power remains frustratingly uneven, particularly for women of color and queer women. Examining how women have acted collectively and individually, both within and outside of electoral and governmental channels, the book moves from the front lines of community organizing to the highest glass ceiling. Essays touch on

Stacie Taranto is an associate professor of history at Ramapo College of New Jersey. She is the author of Kitchen Table Politics: Conservative Women and Family Values in New York. Leandra Zarnow is an assistant professor of history and affiliated faculty in the Women's, Gender, and Sexuality Studies Program at the University of Houston. She is the author of Battling Bella: The Protest Politics of Bella Abzug.