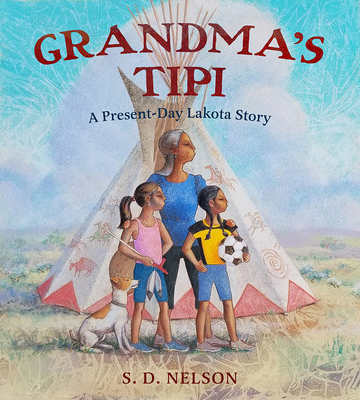 Now that Clara is almost in third grade, she’s finally old enough to spend her first summer away from home visiting her grandma, Unci, and her cousin at their home in Standing Rock Reservation. To welcome her visit, Uncle Louie brings an extra-special surprise in his pickup truck: the tipi that’s been passed down through their family for generations. The girls learn how to stack the poles and wrap the canvas covering around them, how to paint spirit pictures on its walls, and how the circle of the tipi tells its own story, reminding us to how to live in the great Circle of Life. Over long days spent playing outside, doing beadwork together, telling stories, singing songs, and sleeping under the stars, the tipi brings the family closer together. As summer draws to an end, goodbye comes all too soon, but Clara will always cling to the memories of summer days and starry nights . . . and Grandma’s tipi.
An enrolled member of the Standing Rock Sioux Tribe in the Dakotas, S. D. Nelson is descended from Norse and American Indian heritage. He is the author and illustrator of numerous award-winning children’s books inspired by his Great Plains heritage, including Black Elk’s Vision, The Star People, and the middle-grade nonfiction book Crazy Horse and Custer: Born Enemies. His books have received the American Indian Library Association Honor Book Award, the Spur Award from the Western Writers of America, and the American Library Association Notable Book Award. Nelson has lectured at the National Museum of the American Indian/Smithsonian in Washington, DC, and has presented the keynote address for Read North Dakota. The artist’s paintings are held in many permanent collections including the National Museum of the American Indian in Washington DC, the National Museum of the Marine Corps in VA, Little Bighorn Battlefield National Monument in MT, the Crazy Horse Monument in SD, and the State Historical Societies of South Dakota, North Dakota, and Minnesota. Combined with the stories he tells Nelson’s art reveals the richness and depth of Lakota life. He creates with acrylic paint which he brushes, sponges, splatters, and sprays. His artwork offers a contemporary interpretation of traditional Lakota imagery. Visit: www.sdnelson.net.