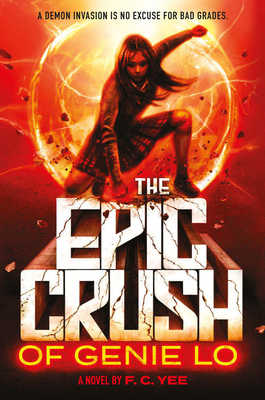 Outside of writing, F. C. Yee practices capoeira, a Brazilian form of martial arts, and has a day job mostly involving spreadsheets. His debut YA novel, The Epic Crush of Genie Lo, released in August 2017 to critical acclaim. He lives and writes in Denver. The Shadow of Kyoshi was written in consultation with Michael Dante DiMartino, the co-creator, executive producer, and story editor of the animated TV series Avatar: The Last Airbender and The Legend of Korra.

**STARRED REVIEW**
"A tough, self-disciplined Chinese-American teen deals with the supernatural derailing of her college-prep activities in this speculative fiction novel that draws on the folklore of the Chinese Monkey King... An exciting, engaging, and humorous debut that will appeal widely, this wraps up neatly enough but leaves an opening for further installments—here's hoping."
— Kirkus Reviews

**STARRED REVIEW**
"Genie's perspective on the strange turn her life has taken will have readers laughing out loud...Hilarious and action-packed, this fantastically executed tale of the Monkey King in modern-day California introduces a great new character in Genie Lo."
— School Library Journal

**STARRED REVIEW**
"Yee builds a world filled with characters that carry the page-turning plot... presented in a distinctive way, combined with Yee’s vivid action scenes that take place in a familiar setting, will send readers searching for more tales about Sun Wukong."
— VOYA

"It’s refreshing to see the Chinese pantheon steal some of the literary attention lavished on the Greek, Roman, and Nordic gods, and Yee handily gets Western readers up to speed on requisite backstories and proclivities."
— Bulletin of the Center for Children's Books