The Manual of Aeronautics: An Illustrated Guide to the Leviathan Series (Hardcover) 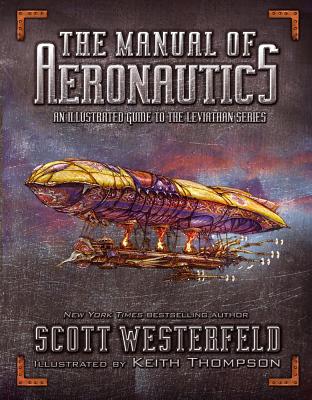 The Manual of Aeronautics: An Illustrated Guide to the Leviathan Series (Hardcover)

A must-have for any fan of Scott Westerfeld’s Leviathan trilogy, The Manual of Aeronautics is an illustrated guide to the inner workings of the Darwinist and Clanker powers. Loaded with detailed descriptions and elaborate, four-color illustrations of Darwinist beasties and Clanker walkers, weapons, transport, and uniforms, this manual highlights the international powers that Deryn and Alek encounter throughout their around-the-world adventures. This guide draws back the curtain and reveals the inner depths of Westerfeld’s fascinating alternative world.
Scott Westerfeld is the author of the Leviathan series, the first book of which was the winner of the 2010 Locus Award for Best Young Adult Fiction. His other novels include the New York Times bestseller Afterworlds, the worldwide bestselling Uglies series, The Last Days, Peeps, So Yesterday, and the Midnighters trilogy. Visit him at ScottWesterfeld.com or follow him on Twitter at @ScottWesterfeld.