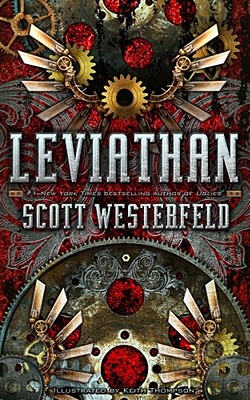 This is book number 1 in the The Leviathan Trilogy series.

“Leviathan is a fantastic and beautifully illustrated steampunk version of The Great War. In this alternate universe, the Clankers put their faith in elaborate steam-powered machines and the Darwinists manage huge living airships that are whole ecosystems. But this is mostly the story of two 15-year-olds who are both hiding secrets. Prepare yourself for an adventurous ride.”
— Joanne R. Fritz, Chester County Book & Music Company, West Chester, PA

It is the cusp of World War I, and all the European powers are arming up. The Austro-Hungarians and Germans have their Clankers, steam-driven iron machines loaded with guns and ammunition. The British Darwinists employ fabricated animals as their weaponry. Their Leviathan is a whale airship, and the most masterful beast in the British fleet.

Aleksandar Ferdinand, prince of the Austro-Hungarian Empire, is on the run. His own people have turned on him. His title is worthless. All he has is a battle-torn Stormwalker and a loyal crew of men.

Deryn Sharp is a commoner, a girl disguised as a boy in the British Air Service. She's a brilliant airman. But her secret is in constant danger of being discovered.

With the Great War brewing, Alek's and Deryn's paths cross in the most unexpected way...taking them both aboard the Leviathan on a fantastical, around-the-world adventure. One that will change both their lives forever.
Scott Westerfeld is the author of the Leviathan series, the first book of which was the winner of the 2010 Locus Award for Best Young Adult Fiction. His other novels include the New York Times bestseller Afterworlds, the worldwide bestselling Uglies series, The Last Days, Peeps, So Yesterday, and the Midnighters trilogy. Visit him at ScottWesterfeld.com or follow him on Twitter at @ScottWesterfeld.