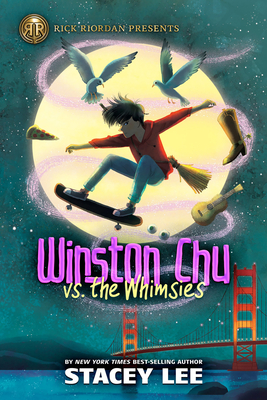 Twelve-year-old Winston Chu is supposed to learn impulse control at the cooking academy his mom enrolled him in. But learning to think before he acts won’t happen overnight.

While skateboarding home with a pie in hand, Winston inadvertently stops a robbery at Mr. Pang’s Whimsies, an oddities shop in Chinatown. As a reward, Mr. Pang invites Winston to choose any item in the store. But the strange old man warns Winston to browse carefully, for the first thing Winston touches will be the thing he gets. Before Winston can decide, a magpie flies under a shelf, and he impulsively grabs an old broom to sweep it out.

Mr. Pang hands him the broom, along with a dustpan. “Two for one. Congratulations.”

Deflated, Winston returns home, determined to put the broom incident behind him. Or at least in the closet. But when some of his most beloved possessions go missing, all Winston can think about are the broom and dustpan. Did they somehow take his stuff? And what—or who—will they dispose of next?

It’s time to break into Mr. Pang’s Whimsies, where clearly there’s more going on than meets the far-seeing eyeball. It’s time to fight magic with magic. And this time, Winston better have a plan.

Endorsed by Rick Riordan, author of Percy Jackson and the Olympians, soon to be a series on Disney+.

Look for these other exciting adventures from Rick Riordan Presents:
Rick Riordan Presents: The Last Fallen Moon by Graci Kim
Rick Riordan Presents: Dragon Pearl by Yoon Ha Lee
Rick Riordan Presents: Pahua and the Soul Stealer by Lori M. Lee
Rick Riordan Presents: Aru Shah and the End of Time by Roshani Chokshi
Stacey Lee is the New York Times and Indie bestselling author of historical and contemporary young adult fiction, including The Downstairs Girl, a Reese’s Book Club Late Summer 2021 YA pick, and her most recent novel, Luck of the Titanic, which received five starred reviews. A native of southern California and fourth-generation Chinese American, she is a co-founder of the We Need Diverse Books movement and writes stories for all kids (even the ones who look like adults). Stacey loves board games, has perfect pitch, and through some mutant gene, can smell musical notes through her nose. Follow her on Instagram and Twitter @staceyleeauthor.

Website: www.staceyhlee.com
Instagram: www.instagram.com/staceyleeauthor
Twitter: twitter.com/staceyleeauthor
"From creepy Coco to delicious bubble tea, Stacey Lee weaves together elements from west, east, and in between to create a magical world all its own. I became a fan all over again."——Abigail Hing Wen, New York Times best-selling author of the Loveboat, Taipei series

"It is a spectacular kind of joy to find a book that makes you wonder and dream and believe that magic is just around the corner waiting to happen—Winston Chu vs. the Whimsies does this and more. In her explosively clever middle grade debut, Stacey Lee has written a brilliant adventure full of humor, heart, and whimsically wicked objects."——Stephanie Garber, New York Times #1 & internationally best-selling author of the Caraval series

"Lee deftly crafts an adventure that strings together seemingly random clues only to have them fall satisfyingly into place in the end. Themes of friendships, grief, and family love are explored throughout . . . There’s plenty of magic, healing, and love to enjoy on this roller-coaster ride."——Kirkus Reviews

“Winston Chu vs. the Whimsies is a roller coaster ride of enchanting surprises and chaotic magic that leads the reader through the most epic journey! I didn't want it to end!!”——Ellen Oh, award-winning author of Finding Junie Kim and the Spirit Hunters trilogy

“Winston Chu vs. the Whimsies is the best kind of adventure story—one with both hilarious magic and a heartfelt emotional core!"——Xiran Jay Zhao, #1 New York Times best-selling author of Zachary Ying and the Dragon Emperor

“We read to learn, right? Winston Chu vs. the Whimsies teaches you all sorts of useful skills, like how to get your sister's soul out of a doll, how to help celestial spirits find love, and what not to choose when a strange shopkeeper offers you one free gift. Lee's tale is full of family, friendship, hijinks, hilarity, and flying pizza slices that will slap you if you're not careful—all told by a master raconteur.”——Carlos Hernandez, award-winning author of Sal and Gabi Break the Universe