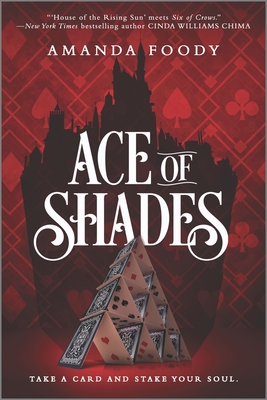 This is book number 1 in the Shadow Game series.

"Ace of Shades has it all ...an utter delight."--Claire Legrand, New York Times bestselling author of Furyborn

From the New York Times bestselling coauthor of All of Us Villains.

Welcome to the City of Sin, where casino families reign, gangs infest the streets...and secrets hide in every shadow.

New Reynes, the so-called City of Sin, is no place for a properly raised young lady. But when her mother goes missing, Enne Salta must leave her finishing school--and her reputation--behind to follow her mother's trail in the city where no one survives uncorrupted.

Frightened and alone, Enne's only clue leads her to Levi Glaiyser--a street lord and a con man in desperate need of the compensation Enne offers. Their search sends this unlikely duo through glamorous casinos, illicit cabarets, and into the clutches of a ruthless Mafia donna. But as Levi's enemies close in on them, a deadly secret from Enne's past comes to light and she must surrender herself to the City of Sin -- to a vicious game of execution...

Where the players never win.

Praise for Ace of Shades:
"A rich, satisfying, complicated story. One of the best fantasy series I've read in years."--Christine Lynn Herman, author of The Devouring Gray

"Thieves, rogues, and shady characters have always fascinated me, and so I enjoyed my dive into the morally ambiguous world of New Reynes." -New York Times bestselling author Cinda Williams Chima

The Shadow Game Series:
Ace of Shades
King of Fools
Queen of Volts