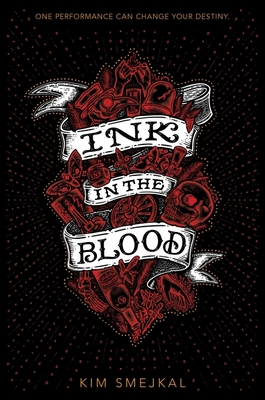 By Kim Smejkal
$17.99
Available from Our Distributor (Not in Store)

A lush, dark YA fantasy debut that weaves together tattoo magic, faith, and eccentric theater in a world where lies are currency and ink is a weapon, perfect for fans of Leigh Bardugo and Kendare Blake.

Celia Sand and her best friend, Anya Burtoni, are inklings for the esteemed religion of Profeta. Using magic, they tattoo followers with beautiful images that represent the Divine’s will and guide the actions of the recipients. It’s considered a noble calling, but ten years into their servitude Celia and Anya know the truth: Profeta is built on lies, the tattooed orders strip away freedom, and the revered temple is actually a brutal, torturous prison.

Their opportunity to escape arrives with the Rabble Mob, a traveling theater troupe. Using their inkling abilities for performance instead of propaganda, Celia and Anya are content for the first time . . . until they realize who followed them. The Divine they never believed in is very real, very angry, and determined to use Celia, Anya, and the Rabble Mob’s now-infamous stage to spread her deceitful influence even further.

To protect their new family from the wrath of a malicious deity and the zealots who work in her name, Celia and Anya must unmask the biggest lie of all—Profeta itself.

Kim Smejkal lives with her family on Vancouver Island in Canada, which means she’s often lost in the woods or wandering a beach. She writes dark fantasy for young adults and not-so-young adults, always with a touch of magic.
kimsmejkal.com
Twitter: @KimSmejkal
Instagram: @kimsmejkal

"Smejkal’s debut creates an intriguing, enticing world....This is a vivid, imaginative confection with plenty of bite underneath the glitter that will appeal to fans of Holly Black’s signature dark delights." —The Bulletin of the Center for Children's Books

"A strong debut that blends dark fantasy, ink magic, and theater....The promising first in a duology with inspiring friendships and original worldbuilding." —Kirkus

"Smejkal has created a dark, engaging world that is the perfect setting for magic and inking." —School Library Journal

"Beautiful, dark and complex—Ink in the Blood is a debut with teeth. I can't wait for the sequel!" —Ryan Graudin, award-winning author of Wolf By Wolf

"Ink in the Blood is an inventive dark fantasy that doesn't pull its punches and is all the more gripping for it. Wonderfully tense and breathtakingly beautiful, the story of Celia and Anya will burrow under your skin and stay there long after you've finished reading." —Linsey Miller, author of the Mask of Shadows duology and Belle Révolte

"Haunting and vividly imagined,Ink in the Blood will crawl beneath your flesh and leave its mark, just like the magical tattoos within.” —Rebecca Schaeffer, author of Not Even Bones