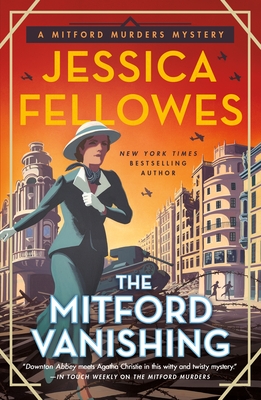 This is book number 5 in the The Mitford Murders series.

A mystery with the fascinating Mitford sisters at its heart, Jessica Fellowes's The Mitford Vanishing is the fifth installment in the Mitford Murders series, inspired by a real-life murder in a story full of intrigue…

“Downton Abbey meets Agatha Christie in this witty and twisty mystery.” —In Touch Weekly on The Mitford Murders

1937. War with Germany is dawning, and a civil war already rages in Spain. Split across political lines, the six Mitford sisters are more divided than ever. Meanwhile their former maid Louisa Cannon is now a private detective, working with her policeman husband Guy Sullivan.

Louisa and Guy are surprised when a call comes in from novelist Nancy Mitford requesting that they look into the disappearance of her Communist sister Jessica in Spain. But one case leads to another as they are also asked to investigate the mysterious vanishing of a soldier.

As the two cases come together, Louisa and Guy discover that every marriage has its secrets—but some are more deadly than others. Suddenly home feels a long way away...

JESSICA FELLOWES is an author, journalist, and public speaker. She is the author of The Mitford Murders novels as well as the New York Times bestselling official companion books to the Downton Abbey TV series. Former deputy editor of Country Life, and columnist for the Mail on Sunday, she has written for the Daily Telegraph, the Guardian, The Sunday Times, and The Lady. Jessica has spoken at events across the UK and US, and has made numerous appearances on radio and television. She lives in Oxfordshire with her family.

"A fascinating story based on real people and places."—Kirkus Reviews

"A twisty plot and premise sure you hook you in."—Book Riot, "The Most Anticipated Historical Fiction Reads in the First Half of 2022"

"The author skillfully weaves a second disappearance into this cleverly plotted mystery, and a surprise into its resolution."—Historical Novel Society

Praise for the Mitford Murders mysteries:

“With nearly as much period detail as an episode of "Downton [Abbey]," this delightful romp satisfies like a cup of strong nursery tea accompanied by a Battenburg cake.”—The Washington Post on The Mitford Murders

"A real murder, a real family and a brand new crime fiction heroine are woven together to make a fascinating, and highly enjoyable, read. I loved it." —Julian Fellowes, creator and writer of Downton Abbey and Belgravia on The Mitford Murders

"Exactly the sort of book you might enjoy with the fire blazing, the snow falling etc. The solution is neat and the writing always enjoyable." —Anthony Horowitz, New York Times bestselling author of Magpie Murders on The Mitford Murders

"True and glorious indulgence. A dazzling example of a golden age mystery." —Daisy Goodwin, author of Victoria and The American Heiress on The Mitford Murders

"Inspired by the larger-than-life Mitford family and a real-life murder, Fellowes delivers a ripping-good read." - Booklist on The Mitford Trial

"If you like your historical capers served with a side of murder, consider the sleuthing adventures of Louisa Cannon, occasional amateur detective and erstwhile servant to the Mitfords, real-life aristocratic siblings – Nancy, Diana, Unity, Pamela, Decca, Debbo – who all made their mark upon the 20th century . . . Sparkly." - The Globe and Mail ("Loved Bridgerton? You'll Fall for this Crop of New Escapist Historical Fiction" on The Mitford Trial

"A richly detailed period piece. . .[A] deft weaving of historical fact and imagined intrigue." - Kirkus on The Mitford Scandal

“Fellowes excels at depicting the inherent tensions between the upper classes and their servants.”—Publishers Weekly on Bright Young Dead

“Fellowes captures the style and frenetic energy or the ‘bright young things’ of the upper class in the Roaring Twenties. The characters are engaging, and the story’s historical basis makes it ring true. Fans of Downton Abbey and mysteries by Jacqueline Winspear will enjoy this classic mystery.”—Library Journal on Bright Young Dead