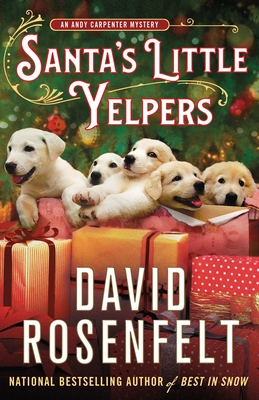 This is book number 26 in the An Andy Carpenter Novel series.

'Tis the season in Paterson, New Jersey: Lawyer Andy Carpenter and his golden retriever, Tara, are surrounded by holiday cheer. It’s even spread to the Tara Foundation. The dog rescue organization, not used to having puppies, has their hands full with a recent litter. Eight puppies are a lot to handle, and Andy is relieved when his co-worker Chris Myers agrees to foster them.

Myers, a newer employee at the Tara Foundation, did time for a crime he swears he didn’t commit. When Myers discovers a key witness against him lied on the stand, he goes to Andy to ask for representation in getting the conviction overturned. Myers thinks they can have this wrapped up by Christmas, no problem.

But when the witness is murdered, and Myers is arrested for the crime, things go from bad to worse. Suddenly, it’s all elves on deck to make a list and check it twice, so they can prove Myers is innocent.

“The climactic revelation, as in all of Andy’s best cases, is both head-shakingly incredible and deeply satisfying.” —Kirkus Reviews