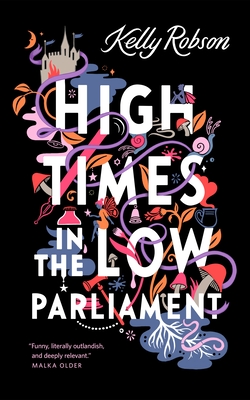 A NPR Best of the Year pick!

A Most Anticipated Pick for Autostraddle | LGBTQ Reads

Award-winning author Kelly Robson returns with High Times in the Low Parliament, a lighthearted romp through an 18th-century London featuring flirtatious scribes, irritable fairies, and the dangers of Parliament.

Lana Baker is Aldgate’s finest scribe, with a sharp pen and an even sharper wit. Gregarious, charming, and ever so eager to please, she agrees to deliver a message for another lovely scribe in exchange for kisses and ends up getting sent to Low Parliament by a temperamental fairy as a result.

As Lana transcribes the endless circular arguments of Parliament, the debates grow tenser and more desperate. Due to long-standing tradition, a hung vote will cause Parliament to flood and a return to endless war. Lana must rely on an unlikely pair of comrades—Bugbite, the curmudgeonly fairy, and Eloquentia, the bewitching human deputy—to save humanity (and maybe even woo one or two lucky ladies), come hell or high water.

Kelly Robson lives in downtown Toronto with her wife, writer A.M. Dellamonia. Her novelette “A Human Stain” won the 2018 Nebula Award, and her time travel adventure Gods, Monsters, and the Lucky Peach won the 2019 Aurora Award and was a finalist for the Hugo, Nebula, Theodore Sturgeon, and Locus Awards. Kelly’s first short story collection Alias Space and Other Stories was published in 2021. Find her on Twitter and Instagram.

"Witty, warmhearted, frequently gorgeous, and an awful lot of fun."—NPR

“High Times is funny, literally outlandish, and deeply relevant. A dazzling world, a terrifying predicament, and a lot of hallucinogenic drugs combine in an unlikely, engaging tale of friendship, wit, heroism, and romance.”—Malka Older

“Hilarious, and at times hallucinogenic, Kelly Robson’s High Times in Low Parliament lives up to its title. This book could flirt the knickers off a nun—or a politician—or a wicked fairy—then swagger back to snuggle us before our pillows grew cold.”—C.S.E. Cooney

“A great read, with all the right ingredients!”—Ellen Kushner

“A satirical send-up of politicians and bureaucrats wrapped in a story of queer love and female friendship, sprinkled with fairy dust . . . Readers who like their political fantasies and power trips to go down with a spoonful of sugar will eat this up.”—Library Journal

"Robson’s story, like Lana, is a tease, fascinating and clever . . . The political satire is sharp though, in this lighthearted romp."—Booklist

“High Times in the Low Parliament is, at its best, demented fun and shrewd satire . . . Robson has introduced us to a thoroughly engaging rogue in Lana, along with an appealingly grumpy fairy who comes to learn that humans might, after all, be worth saving from themselves. It's a pair we wouldn't mind visiting again.”—Locus