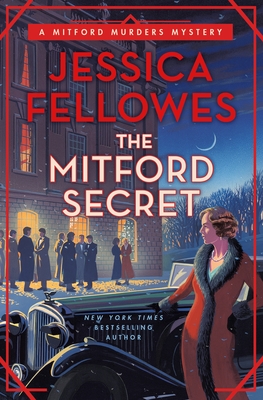 This is book number 6 in the The Mitford Murders series.

A mystery with the fascinating Mitford sisters at its heart, Jessica Fellowes’s The Mitford Secret is the sixth and final intriguing installment in the Mitford Murders series.

It’s 1941, and the Mitford household is splintered by the vicissitudes of war. To bring the clan together—maybe for one last time, Deborah invites them to Chatsworth for Christmas, along with a selection of society’s most impressive and glamorous guests, as well as old family friend Louisa Cannon, a private detective.

One night, a psychic arrives, and to liven things up Deborah agrees she may host a séance. But entertainment turns to dark mystery as the psychic reveals that a maid was murdered in this very same house—and she can prove it.

Louisa steps forward to try to solve the cold case. But with a house full of people who want nothing more than to bury their secrets, will she be able to unmask the murderer? And how deep does the truth lie?

JESSICA FELLOWES is an author, journalist, and public speaker. She is the author of The Mitford Murders novels as well as the New York Times bestselling official companion books to the Downton Abbey TV series. Former deputy editor of Country Life, and columnist for the Mail on Sunday, she has written for the Daily Telegraph, the Guardian, The Sunday Times, and The Lady. Jessica has spoken at events across the UK and US, and has made numerous appearances on radio and television. She lives in Oxfordshire with her family.
"Fellowes's strong six and final mystery centered on the real-life Mitford family. Fellowes neatly balances period detail and fair cluing. Fans will be happy to see this series going out on a high note."—Publishers Weekly