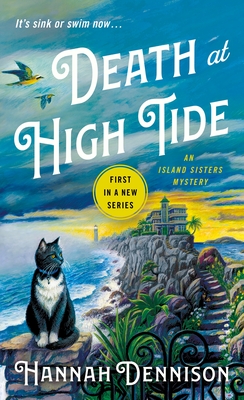 This is book number 1 in the The Island Sisters series.

Death at High Tide is the delightful first installment in the Island Sisters series by Hannah Dennison, featuring two sisters who inherit an old hotel in the remote Isles of Scilly off the coast of Cornwall and find it full of intrigue, danger, and romance.

When Evie Mead’s husband, Robert, suddenly drops dead of a heart attack, a mysterious note is found among his possessions. It indicates that Evie may own the rights to an old hotel on Tregarrick Rock, one of the Isles of Scilly.

Still grieving, Evie is inclined to leave the matter to the accountant to sort out. Her sister Margot, however, flown in from her glamorous career in LA, has other plans. Envisioning a luxurious weekend getaway, she goes right ahead and buys two tickets—one way—to Tregarrick.

Once at the hotel—used in its heyday to house detective novelists, and more fixer-upper than spa resort, after all—Evie and Margot attempt to get to the bottom of things. But the foul-tempered hotel owner claims he's never met the late Robert, even after Evie finds framed photos of them—alongside Robert's first wife—in his office. The rest of the island inhabitants, ranging from an ex-con receptionist to a vicar who communicates with cats, aren't any easier to read.

But when a murder occurs at the hotel, and then another soon follows, frustration turns to desperation. There’s no getting off the island at high tide. And Evie and Margot, the only current visitors to Tregarrick, are suspects one and two. It falls to them to unravel secrets spanning generations—and several of their own—if they want to make it back alive.

HANNAH DENNISON was born and raised in Hampshire but spent more than two decades living in California. She has been an obituary reporter, antique dealer, private jet flight attendant and Hollywood story analyst. Hannah continues to teach online mystery writing workshops for the UCLA Extension Writers’ Program in Los Angeles. In addition to the Island Sisters series, Hannah writes the Honeychurch Hall Mysteries and the Vicky Hill Mysteries both set in the wilds of the Devonshire countryside where she now lives with her two high-spirited Hungarian Vizslas.

"An intriguing yarn filled with secrets and sins, including false identities, covert relationships, adultery, greed and theft. With a dollop of whimsy, a cast of eccentrics and an intricate puzzle, Death at High Tide will sweep you away with its sly charm, its wicked wit and its artful trickery." —The Fredericksburg Free Lance-Star

"Winning...Two murders and a high tide cutting off the police heighten the suspense. Intriguing characters and an intricate plot lift this twist on Agatha Christie’s And Then There Were None. Cozy fans will look forward to further skullduggery on Tregarrick." —Publishers Weekly

"An entertaining mystery with the right dose of suspense to keep the pages turning." —Suspense Magazine

"Death at High Tide took me away to a new and beautiful place. I have no idea when I'll get a chance to travel to the Scilly Isles, but in the meantime, I'm definitely going to enjoy this series set there." —Donna Andrews, New York Times bestselling author of the Meg Langslow series

"A blend of all my favorite things: the Scilly Isles...the joys and trials of sisterhood, fun characters and of course Hannah Dennison’s witty prose. If you love Doc Martin, this is for you! A complete delight." —Rhys Bowen, New York Times bestselling author

"A delightful new mystery series featuring a truly unique setting, wonderfully eccentric characters, a thoroughly intriguing plot, and the most fascinating cat in the world. Do not miss this fast-paced, funny, and charming mystery from a true master of the genre!" —Kate Carlisle, New York Times bestselling author

"Hannah Dennison is a master of the cozy mystery. With her charm and humor, she creates characters you want to know forever and stories you won’t forget. Death at High Tide is a pure delight—the British island scenery will capture your imagination, and sisters Evie and Margot will make you laugh out loud even as they solve a mysterious murder." —Paige Shelton, New York Times bestselling author

"Christie lives! A deliciously Golden-Age setting, a deftly handled cast of shady characters, a beguiling heroine and side-kick, and a beautifully nested plot full of puzzles—the Island Sisters series opens with a bang."
—Catriona McPherson, multi-award-winning and national bestselling author of Go to My Grave

"Equally atmospheric and classic. The lonely Isles of Scilly off the Cornish coast provide the perfect backdrop for murder. I felt like I was transported to the moody, remote island with its sea tractor, crumbling lighthouse, and sinister cast of quirky suspects stranded together in a dilapidated hotel on the archipelago. With notes of Agatha Christie’s And Then There Were None and touches of The Guernsey Literary and Potato Peel Society and The Durrells in Corfu, I was completely captivated by Dennison’s cleverly crafted plot, well-developed characters, and masterful take on England’s sub-tropical paradise." —Ellie Alexander, author of the Bakeshop Mystery series and Sloan Kraus Mystery series