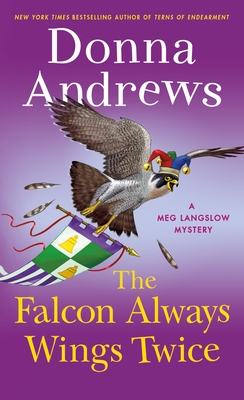 This is book number 27 in the Meg Langslow Mysteries series.

When Meg's grandmother Cordelia hosts a Renaissance Faire at her craft center, the whole family is put to work: Meg handles the blacksmithing, Michael and the boys will be performing, and no one misses the opportunity to dress up in full regalia.

More exciting to Grandfather is the pair of rare falcons he discovers breeding at the fairgrounds. Concerned for their well-being amid all the activity, he appoints himself their protector.

When one of the actors performing at the fair is found dead—an actor suspected of mistreating one of the falcons, among other sins—Grandfather is a prime suspect.

Donna Andrews’s long-running Meg Langslow series continues to be beloved by its fans, who loyally read every new installment. The Falcon Always Wings Twice is a perfect new addition, full of laughter, adventure, and Andrews's wonderful cast of wacky characters.

"Fans of Andrews' humorous cozy series will enjoy the familiar quirky characters, all in fine form in this satisfying entry." —Booklist

"A long-running series that gets better all the time. A fine blend of academic satire, screwball comedy, and murder." —Booklist

"This long-running cozy series shows no signs of losing its freshness." —Publishers Weekly

"Fans will find all the beloved hallmarks of this award-winning series: fresh characters, an engaging puzzle, and delightful humor.” —Library Journal