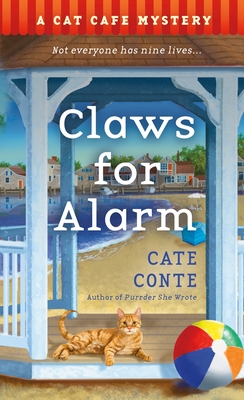 This is book number 5 in the Cat Cafe Mystery Series series.

In Claws for Alarm, the fifth book in Cate Conte's delightful and cat-filled series, it’s the heart of the busy season, and JJ’s House of Purrs is booming—until a killer is let off the leash.

Maddie James has finally given in to her friend Katrina’s pleas to open up her cat cafe to more than ten felines: they’re now up to fifteen purring friends. In fact, JJ’s House of Purrs is making such a splash that she’s getting national attention. The Shoreline Animal Rescue League is quite interested in the cafe, and so Maddie accepts a request to meet with Jillian Allen, the executive director. Jillian shows up at the cafe and asks Maddie if they can partner on a fundraiser to support the local rescue efforts—and she offers up her celebrity endorser and her celebrity cat to sweeten the deal. Maddie, caught up in the prospect, offers up her sister Val to help plan the event.

But when Val shows up for a site visit at the venue, she finds Jillian strangled with a fancy cat leash—a piece of swag they were intending to use for the fundraiser—leaving Maddie with a lot of questions to answer. Was her death a tragic one-off event, or is there something more sinister going on? Maddie has to figure it out fast, before anyone else in the rescue community is jeopardized.

Cate Conte writes the Cat Cafe Mysteries and the new Full Moon Mysteries. As Liz Mugavero, she writes the Pawsitively Organic Mysteries, the first of which was an Agatha Award nominee for Best First Novel. She lives in Connecticut with her rescue pals.

Praise for A Whisker of a Doubt:

"A Whisker of a Doubt is a well-written cozy mystery that brings awareness to a real issue many communities actually deal with: feral cats colonies and how to properly care for and save the cats. Conte puts forth a super entertaining story with an engaging plot, eccentric characters, and fun banter." - Mystery & Suspense

"The holiday season comes alive in this fourth Cat Café mystery that makes the most of the wintery days before Christmas. The issue of how — and why — to manage a feral cat colony is compassionately and objectively examined, realistically tackling its many complications. A rogue Christmas saboteur is thrown into the mix to add motives for murder as well as providing humor." - Kings River Life

"Fun to read [with] a good message about feral cats." - Red Carpet Crash