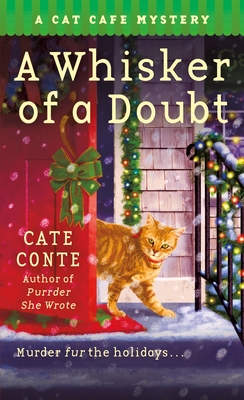 This is book number 4 in the Cat Cafe Mystery Series series.

It's promising to be a picture-purrfect Christmas at New England's favorite cat cafe . . . but instead of jolly old St. Nick, residents are being visited by murder. The fourth in a mystery series from author Cate Conte, A Whisker of a Doubt is filled with felines and crime.

The holiday season on Daybreak Island is a mixed bag for Maddie James. On the one hand, her Christmas spirit is in the doghouse after a break-up. On the other, she’s busy enough that she doesn’t have to pretend to be merry. Business at her cat café is booming, and Maddie’s care-taking of a feral cat colony in one of the area’s wealthiest communities only helps her bottom line.

But tensions between the homeowners and animal activists are escalating to catastrophic levels. . .and before long a body is found dead in a snowbank. To prove that her accused friend is innocent of the crime, Maddie will have to prowl the island for clues to the real killer before everyone on the island goes completely hiss-terical—and more than nine lives are lost.

Cate Conte writes the Cat Cafe Mysteries and the new Full Moon Mysteries. As Liz Mugavero, she writes the Pawsitively Organic Mysteries, the first of which was an Agatha Award nominee for Best First Novel. She lives in Connecticut with her rescue pals.

One of Mystery Tribune's "15 Best Crime, Mystery, and Thriller Books of December 2020"

"A Whisker of a Doubt is a well-written cozy mystery that brings awareness to a real issue many communities actually deal with: feral cats colonies and how to properly care for and save the cats. Conte puts forth a super entertaining story with an engaging plot, eccentric characters, and fun banter." - Mystery & Suspense

"The holiday season comes alive in this fourth Cat Café mystery that makes the most of the wintery days before Christmas. The issue of how — and why — to manage a feral cat colony is compassionately and objectively examined, realistically tackling its many complications. A rogue Christmas saboteur is thrown into the mix to add motives for murder as well as providing humor." - Kings River Life

"Fun to read [with] a good message about feral cats." - Red Carpet Crash