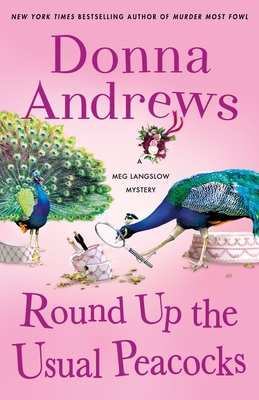 This is book number 31 in the Meg Langslow Mysteries series.

New York Times bestselling author Donna Andrews first introduced us to Meg Langslow as a crime-solving bridesmaid. In her 31st mystery, Round Up the Usual Peacocks, Meg returns to her roots, juggling cold cases and wedding guests.

Kevin, Meg's cyber-savvy nephew who lives in the basement, comes to her with a problem. He's become involved as the techie for a true-crime podcast, one that focuses on Virginia cold cases and unsolved crimes. And he thinks their podcast has hit a nerve with someone . . . one of the podcast team has had a brush with death that Kevin thinks was an attempted murder, not an accident.

Kevin rather sheepishly asks for Meg's help in checking out the people involved in a couple of the cases. "Given your ability to find out stuff online, why do you need MY help?" she asks. "Um . . . because I've already done everything I can online. This'll take going around and TALKING to people," he exclaims, with visible horror. "In person!" Not his thing. And no, it can't wait until after the wedding, because he's afraid whoever's after them might take advantage of the chaos of the wedding at Trinity or the reception at Meg and Michael's house to strike again.

So on top of everything she's doing to round up vendors and supplies and take care of demanding out-of-town guests, Meg must hunt down the surviving suspects from three relatively local cold cases so she can figure out if they have it in for the podcasters. Could there be a connection to a musician on the brink of stardom who disappeared two decades ago and hasn't been seen since?

"Fans of previous books will be amused by the humor; those new to the series will most likely want to check out other chapters in the Langslow life. Donna still has the touch! " — Reviewing the Evidence on Round Up the Usual Peacocks

"Enjoyable... Andrews has shaped Meg as an intelligent, insightful sleuth...Round Up the Usual Peacocks moves at a brisk clip as the plot settles in with an enjoyable visit with Meg... Andrews punctuates the story with just the right amount of humor..." — Oline Cogdill in the South Florida Sun Sentinel

"Meg Langslow is on hand to . . . overcome the curse of the Scottish play, sift through layers and layers of mischief, and choose from among all these zanies the perpetrators of a surprisingly expansive flock of actual crimes. Fans will appreciate the helpful final chapter, which indicates exactly which malefactors have earned which legal punishment." —Kirkus on Murder Most Fowl

"A long-running series that gets better all the time. A fine blend of academic satire, screwball comedy, and murder." —Booklist

“Exceptional....[with] plenty of twists and turns en route to the satisfying ending. As always, spending time with Meg and her wonderful family is a delight. Andrews reinforces her place at the top of the cozy subgenre." —Publishers Weekly on Owl Be Home for Christmas