The Factory Witches of Lowell (Paperback) 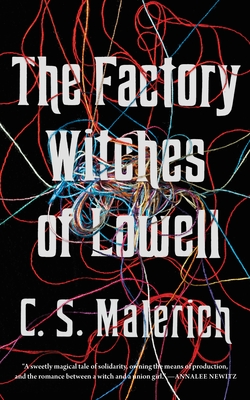 The Factory Witches of Lowell (Paperback)

C. S. Malerich's The Factory Witches of Lowell is a riveting historical fantasy about witches going on strike in the historical mill-town of Lowell, Massachusetts.

Faced with abominable working conditions, unsympathetic owners, and hard-hearted managers, the mill girls of Lowell have had enough. They're going on strike, and they have a secret weapon on their side: a little witchcraft to ensure that no one leaves the picket line.

For the young women of Lowell, Massachusetts, freedom means fair wages for fair work, decent room and board, and a chance to escape the cotton mills before lint stops up their lungs. When the Boston owners decide to raise the workers’ rent, the girls go on strike. Their ringleader is Judith Whittier, a newcomer to Lowell but not to class warfare. Judith has already seen one strike fold and she doesn’t intend to see it again. Fortunately Hannah, her best friend in the boardinghouse—and maybe first love?—has a gift for the dying art of witchcraft.

C. S. MALERICH grew up in northern New Jersey. Storytelling was an early love, her first and favorite subjects being rabbits, felines, and horses. As an adolescent, she became interested in fantasy and mythology, which led her to major in Classics at Montclair State University. In 2005, she followed her best friend to Washington, DC, where she continued avoiding fluency in Greek and Latin and taught mythology to undergrads at the University of Maryland. She’s since pursued interests in folklore, cultural studies, and public health, sometimes all at once.

Her fiction often explores intersections of liberation and justice, with an infectious dance beat. Some of her work has appeared in Apparition Lit, Ares Magazine, and the Among Animals anthologies from eco-fiction publisher Ashland Creek Press. Her novel Fire & Locket was published in 2019.

C.S. continues to live and work in the DC area.

“The Factory Witches of Lowell is a sweetly magical tale of solidarity, owning the means of production, and the romance between a witch and a union girl. I loved it madly.” —Annalee Newitz

“Women's work — silent, invisible, necessary — has always looked like magic from the outside. The Factory Witches of Lowell makes literal the unspoken societal fear of women with the capacity to organize and the willingness to sacrifice for each other and for a better world.” —Madeline Ashby

“Malerich weaves a rich story, as meaningful as it is fantastic, that will have you cheering the underdog in this unique take on workers, bosses, and class struggle.” —P. Djèlí Clark

“New England witches fight for their rights with pragmatism and passion, using their wits and their art to battle forces of capitalist exploitation. A must-read for fans of authentic and engaging historical fantasy.” —Katharine Duckett

"Sisterhood, love, and magic blossom in this timely tale of protest based on a historical incident...Slender but still well-crafted and satisfying." —Kirkus