He Who Drowned the World (The Radiant Emperor Duology #2) (Hardcover) 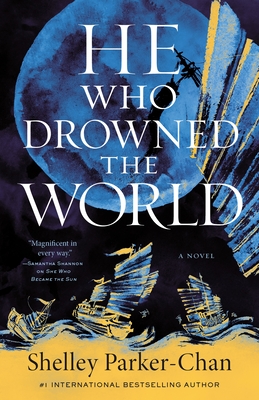 He Who Drowned the World (The Radiant Emperor Duology #2) (Hardcover)

This is book number 2 in the The Radiant Emperor Duology series.

How much would you give to win the world?

Zhu Yuanzhang, the Radiant King, is riding high after her victory that tore southern China from its Mongol masters. Now she burns with a new desire: to seize the throne and crown herself emperor.

But Zhu isn’t the only one with imperial ambitions. Her neighbor in the south, the courtesan Madam Zhang, wants the throne for her husband—and she’s strong enough to wipe Zhu off the map. To stay in the game, Zhu will have to gamble everything on a risky alliance with an old enemy: the talented but unstable eunuch general Ouyang, who has already sacrificed everything for a chance at revenge on his father’s killer, the Great Khan.

Unbeknownst to the southerners, a new contender is even closer to the throne. The scorned scholar Wang Baoxiang has maneuvered his way into the capital, and his lethal court games threaten to bring the empire to its knees. For Baoxiang also desires revenge: to become the most degenerate Great Khan in history—and in so doing, make a mockery of every value his Mongol warrior family loved more than him.

All the contenders are determined to do whatever it takes to win. But when desire is the size of the world, the price could be too much for even the most ruthless heart to bear…

Shelley Parker-Chan is an Australian by way of Malaysia and New Zealand. A 2017 Tiptree Fellow, she is the author of the historical fantasy novel She Who Became the Sun. Parker-Chan spent nearly a decade working as a diplomat and international development adviser in Southeast Asia, where she became addicted to epic East Asian historical TV dramas. After a failed search to find English-language book versions of these stories, she decided to write her own. Parker-Chan currently lives in Melbourne, Australia, where she is very grateful to never have to travel by leaky boat ever again. She won the Astounding Award for Best New Writer in 2022.