Unbound: My Story of Liberation and the Birth of the Me Too Movement (Paperback) 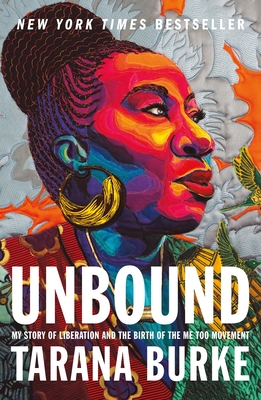 Unbound: My Story of Liberation and the Birth of the Me Too Movement (Paperback)

“Sometimes a single story can change the world. Unbound is one of those stories. Tarana’s words are a testimony to liberation and love.” —Brené Brown

From the founder and activist behind one of the largest movements of the twentieth and twenty-first centuries, the "me too" movement, Tarana Burke debuts a powerful memoir about her own journey to saying those two simple yet infinitely powerful words—me too—and how she brought empathy back to an entire generation in one of the largest cultural events in American history.

Tarana didn’t always have the courage to say "me too." As a child, she reeled from her sexual assault, believing she was responsible. Unable to confess what she thought of as her own sins for fear of shattering her family, her soul split in two. One side was the bright, intellectually curious third generation Bronxite steeped in Black literature and power, and the other was the bad, shame ridden girl who thought of herself as a vile rule breaker, not as a victim. She tucked one away, hidden behind a wall of pain and anger, which seemed to work...until it didn’t.

Tarana fought to reunite her fractured self, through organizing, pursuing justice, and finding community. In her debut memoir she shares her extensive work supporting and empowering Black and brown girls, and the devastating realization that to truly help these girls she needed to help that scared, ashamed child still in her soul. She needed to stop running and confront what had happened to her, for Heaven and Diamond and the countless other young Black women for whom she cared. They gave her the courage to embrace her power. A power which in turn she shared with the entire world. Through these young Black and brown women, Tarana found that we can only offer empathy to others if we first offer it to ourselves.

Unbound is the story of an inimitable woman’s inner strength and perseverance, all in pursuit of bringing healing to her community and the world around her, but it is also a story of possibility, of empathy, of power, and of the leader we all have inside ourselves. In sharing her path toward healing and saying "me too," Tarana reaches out a hand to help us all on our own journeys.

For more than 25 years, activist, advocate, and author Tarana Burke has worked at the intersection of sexual violence and racial justice. Fueled by commitments to interrupt sexual violence and other systemic inequalities disproportionately impacting marginalized people, particularly Black women and girls, Tarana has created and led various campaigns focused on increasing access to resources and support for impacted communities, including the ‘me too.’ Movement, which has galvanized millions of survivors and allies around the world, and the me too. International nonprofit organization, founded in 2018. Her New York Times bestselling books You Are Your Best Thing and Unbound have illuminated the power of healing, vulnerability, and storytelling in the movement to end sexual violence.

“Sometimes a single story can change the world. Unbound is one of those stories. Tarana’s words are a testimony to liberation and love.” —Brené Brown

"Burke sings a Black girl's song and Unbound stands alongside I Know Why the Caged Bird Sings and The Color Purple, as a coming of age story that is at once searingly painful, brilliant, and beautiful. Tarana Burke is known around the world for her activism and leadership. Now she will be known as an extraordinary writer." —Imani Perry, author of Breathe

"Tarana Burke is the most important voice of our generation and Unbound is an offering that will set free hearts, families, and communities. I will never stop being grateful for Tarana Burke’s wisdom and courage - and I will never stop thinking about this book." —Glennon Doyle, #1 New York Times Bestselling Author of Untamed and founder of Together Rising

"Burke's Unbound is worthy of being considered next to I Know Why the Caged Bird Sings as one of those rare books that will unfold and welcome parts of us we thought we'd completely hid until the earth is gone. Unbound is the one we readers and writers have been waiting for." —Kiese Laymon, author of Heavy